Where have all the librarians gone?

I've been working as a software developer since leaving university, but that hadn't been my plan: I had set out to be an information professional. My German university degree is called “Diplom-Dokumentar (FH)”, later renamed to Information Manager – equivalent to a bachelor in Library and Information Sciences.

As a student, I was hoping to get a job in the media industry. My six-month internship at a large and well-known magazine publisher had been terrific: They had a huge archives department with dozens of librarians feeding a database of press clippings (one of the world's largest), adding metadata using a highly sophisticated thesaurus and keywording system, and doing research for both their own journalists and external customers. It was an amazing combination of resources and experts, doing a great job of “organizing the world's information”. Which is the first half of Google's mission statement (I'll come back to the second half later).

But once I had my degree, it was clear that there would be no new jobs in German press archives. Even back in 1997, publishers feared declining revenues and had started to cut librarian's jobs. Digitization meant less manual work (I hope the software I wrote didn't make people lose their job), and the bosses figured that the value added by librarians wasn't entirely appreciated by their audience: A little less quality would save the publisher a reasonable amount of money, without losing them many readers. (DAM ROI is not a new topic.)

I sent my resumé to the publishing house I had interned at, asking for a librarian's job. Their response: “We won't hire librarians anytime soon, but we see that you can program – how about working for us as a software developer?” They wanted me to write software for their press archives. Which was an okay compromise; even if I wouldn't be one of the librarians, at least I'd help them do their work. And I hoped that once they started hiring librarians again, I could switch over.

Well, I moved to a DAM software company a year later, and have been a developer ever since. German press archival departments have continued to shrink year after year. The Hamburg university closed their “media librarian” program. Some of our DAM company's customers shut down their archival departments completely. The librarians who remain in press archives – and who once were the primary stakeholders, together with whom we designed our DAM installations – have lost influence. Today we're mostly talking to management, marketing, editors and IT. Like Erik Hartman writes, “most librarians are quite invisible […] and on the verge of being fired due to budget cuts”. (It seems to me that the librarian crisis is worse in Germany, with less appreciation for information professionals than in the English speaking world.)

Running an information centric business in the information age, yet getting rid of information specialists? That sounds like a bad joke to me. Digital data will keep growing, so taming and structuring information is more important than ever. “Information curation, in-depth research, digital preservation […] and coaching” (Rob Corrao) get thrown out with the bath water when librarians are fired. Real information retrieval is powered by librarians. I've met wonderful information professionals at our customers, and it breaks my heart when their knowledge and skills are ignored. What has gone wrong?

The second part of the Google mission statement is part of the answer, I think: “... and make it [the world's information] universally accessible and useful”. In many cases, librarians designed “their” DAM systems to help themselves offer the best professional services. Tons of search fields and features, complex metadata that led to great search results as long as you were able to formulate complex queries. But the future clearly was in self-service: Everyone else in the company wanted direct, easy to understand access to the archives. Librarians didn’t always embrace and encourage that – appalled at how ineffective these non-professionals would search, and knowing that self-service wasn’t good for the librarian’s job security.

Huge opportunities were being missed at that point, I’m afraid. “For the right librarian, this is the chance of a lifetime,” wrote Seth Godin. The new digital tools – search engines, automated alerts, semi-automatic categorization, visualization – can be learnt and then used by archivists and librarians to vastly improve their services. They can get proactive, create topic pages, deliver dossiers, own the intranet and Wikis. Bring in new stuff where it makes sense (geo tagging, social sharing, rights management, video archiving). Track and visualize metrics that show how much value they add. And optimize the search engine and metadata for self-service. (Did you know that Google’s huge “search quality” team constantly keeps tweaking its search engine? Tell that to the customer who wants it “to work just like Google search”.) Hard work with a simple goal: “Make it accessible and useful!”

I hope that the tide will be turning soon – that information professionals will start to own the information age, and get the appreciation they deserve. Especially from their employers. “Make them understand what you do and why it's important,” tells David Diamond the librarians. I’m happy that the DAM community is already well aware; keep spreading the word!

Update: Make sure to read David Diamond’s Library Science, Not Library Silence. And Deborah Fanslow explains why my university degree is named after “documentation” in Information Professionals: A Field Guide. 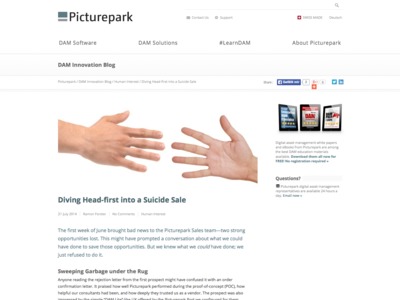 “The other vendor in the bid is known for promising everything you ever want to hear, including substantial discounts, just to land on the short list.

I admit that for a fraction of time I questioned whether our principle to be "honest at all times" makes sense at these times too. Do some prospects just want to buy into the illusion that software will solve all of their problems? Do they buy into "everything is easy", "everything is integrated" and "everything is automated"?” 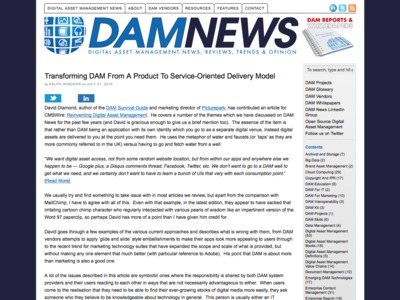 “[People] like to think in terms of products. Buying a software system confers an illusion of commitment to doing something about the problem, […], by contrast, strategy and planning implies having to give up more of everyone's precious time and taking some ownership of (and therefore responsibility for) the problem.

[…] When the vendors deliver the aforementioned demos, they get asked if they support feature X,Y or Z. If not, there are usually fear-induced long pauses followed by either lying, disingenuous re-interpretation of the question to suit the vendor's current capabilities (see previous point) or an assurance that 'it will be available in the next version' (see first point).”

In Reinventing Digital Asset Management, David Diamond writes about the miserable state of integration between DAM software and the places we want to use our digital assets – “our apps and anywhere else we happen to be — Google plus, a Disqus comments thread, Facebook, Twitter, etc.” Integration with native applications like Photoshop and InDesign is a special topic that I’m trying to stay away from as a developer (not fun at all). But most of the apps we use live on the Web. How well do Web apps interoperate?

A little story: As an “enterprise software” shop, we do a lot of custom development. Each feature to be developed is described in our bug tracker software, including customer and project name. When the developer starts working on a feature, he changes the bug tracker record status from “open” to “assigned” (so that the project manager gets notified of the progress). We also have separate time tracking software. The developer starts a timer there – and has to manually enter the customer and project name, and a short feature description.

In theory, this functionality should be trivial to implement. Both applications are Web based, they even have APIs – I just need to read some fields from their databases (hoping that the data structures are compatible) and inject an HTML snippet into their pages. Hey, I’m a Web developer. How hard can it be?

Actually, it’s so hard that I don’t bother doing it. Like most software, including DAM systems, these Web apps are not built for interoperability (or integration; here’s the difference). You’re not supposed to mess with their HTML output. Software vendors are control freaks, they don’t want you to add glue and features (in part because there are security and performance concerns). And they haven’t architected their software for it (think abstractions, services, components). For example, had the WordPress guys wrapped the Media Library in a well-documented API, all DAM vendors could have swapped in their software much more easily and in the same way. Now each one has to handcraft their own WordPress integration.

There are generic approaches to this problem, though. The Dropbox Chooser and Google Picker are nice “File Open” dialogs for the Web. Portlets and Google Gadgets let you embed “foreign” mini-apps (and for Sharepoint, there’s Web Parts). Web Components are a promising new technology that will probably replace all of the above. Webhooks and Web Intents allow for clever links between Web apps.

It’s wonderful that most information lives on the Web nowadays. The simple and open HTTP and HTML standards, and especially hyperlinks, allow us to build amazing connections. Let’s make use of that potential and move from DAM silos to a Web of information!

Update (2016-03-08): Stefan Tilkov, again – Embrace the Browser, Architect’s Edition (or watch the video of his talk). Excellent, and suits me well since I never loved the SPA (Single-page Web app). 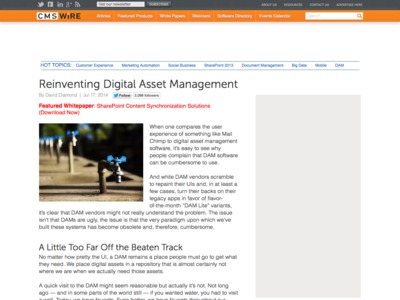 “No matter how pretty the UI, a DAM remains a place people must go to get what they need. We place digital assets in a repository that is almost certainly not where we are when we actually need those assets.

[…] Best-of-breed enables customers to choose which system components they prefer. Instead, we are now seeing vendors buy up and package complete suites for us to consume, lock stock and barrel.

[…] DAM became about marketing for some DAM vendors when they realized that marketing departments had more money than universities and museums.

I'd love to think about this a bit longer, but I have to go repaint our DAM Lite UI now...

James Rourke: How to be a DAM Champion

Jeremiah Karpowicz, Irina Guseva: Discovering the Right Technological, Cultural and Financial DAM Fit in 2014 and Beyond

Eric Smith: Yes, you can speak at a conference

Brandur Leach: The Story of a Thousand Services