The idealist’s guide to leadership in the real world

Are you an idealist? Then you’re probably daydreaming of getting a say in how your organization is run. Once you have access to the decision makers, your great ideas will be heard, and you’re going to change the world together!

Well – unless you’re working for an exceptional organization, you’ll soon find out that the movers and shakers spend most of their time debating rather mundane details. The really important discussions are postponed or don’t result in decisions or actions. Yes, your great ideas will be heard but not much is going to come out of them. Everything will seem to move very slowly. (Except for the occasional surprising move that must have been decided upon when you were not in the room.)

What’s going on? This group of people could change almost everything for the better, yet nothing much happens. What about their passion, creativity, dreams and visions? Or at least, what about the pressing problems that call for swift and strong action?

Here’s what I learned about leadership realities from repeatedly failing to make a difference in “leadership teams” (as the idealistic but powerless guy):

Who said it matters. A lot. As the expert from the lower ranks, you often won’t be taken seriously. They can ignore you just fine regardless of what you said. The words of the powerful inevitably have a lot more weight.

They’re here for the quick wins. This quarter’s project, this year’s money matters. Soft targets like culture or customer satisfaction are less important than hard money and an easy to calculate ROI.

“Best practices” don’t matter. You might be enthusiastic because you finally found the perfect book or article: proof that what you’ve been talking about all along works great for others! Sorry, you will still have a hard time getting people to even think about it.

Facts don’t matter as much as you think: Your well-researched data can easily be dismissed with some anecdotal evidence or inapt metaphor. Because:

People aren’t rational. Most of the time, feeling right is more important to humans than actually being right. (My theory is that engineers are more likely to reflect and analyze rationally because that’s an important part of their job.)

Everyone believes their own lies and exaggerations – the stories they’re telling themselves. People get into the habit of bending the truth a little (it’s done, we have a great company culture, our customers are loving it) because they’ve got to sell something, and soon start living in their own made-up universe.

You cannot convince a group of a dissenting opinion. No matter how well-reasoned your opinion, it needs time to sink in, and groups reinforce the majority’s belief (“group think”). Changing people’s minds is hard.

They don’t really want to know because they’re afraid of change and discomfort. No-one’s intentionally blind, but they'd rather look elsewhere than face an inconvenient truth.

“We’ve got to do something” doesn’t mean it gets done. Even if they agree on doing something, decisions and actions will be postponed whenever possible. Minimal or fake action (scheduling a follow-up meeting, promising to write a concept) is enough to make everyone feel the problem has been addressed.

People don't understand other people’s jobs, and don’t bother trying to. The CEO probably doesn’t know what the QA guy is doing all day, and that’s fine with him.

Some are doing work they don’t love and aren’t passionate about many aspects of their work. Yes, even in upper management.

They’re only striving for “good enough”, not for perfection, so what they get is mediocrity and they’re either fine with that (as long as it makes money) or telling themselves they’re great.

The real values will eventually surface. Honesty. Humility. Empathy. Taking responsibility. Trusting and developing and empowering others. Genuinely caring for customers and employees. Is that really our leaders? (For example, most people are okay with lies as long as it’s them who’s lying.) Sooner or later, you’ll find out.

Do I sound bitter? I don’t mean to. Just needed to write this down so I don’t forget the lessons I learned. (And I’m noticing I’m guilty of some of the above as well…)

I’d love to hear from you: Please teach us your tricks if you succeeded in hacking leadership. (I’m not giving any advice here because I failed at it…) Don’t stop being idealistic, keep changing your part of the world for the better!

(Inspired by the German article Mist im Management by Klaus Schuster, and many other gems linked to from this blog.)

Update (2016-10-20): Ricardo Semler – How to run a company with (almost) no rules: “Almost nobody who is in control is ready to take leaps of faith. It will have to come from kids and other people who are starting companies in a different way.” 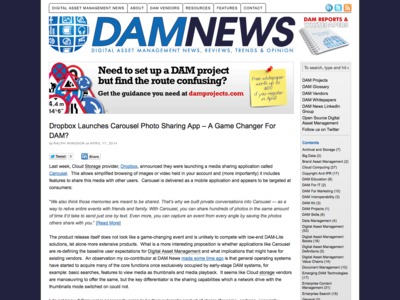 “Budget or low-end applications like Dropbox's Carousel are going to place further upward pressure on the scope of what existing DAM market participants are expected to provide. Anything that looks like 'low hanging fruit' will increasingly be picked by these more generic products.

[…] That will slice away anyone who just wants to put a DAM product out there with and let end users get on with it themselves, unless they plan to do so for little or no cost applied to the end user.”

This is getting interesting: (We) DAM vendors are increasingly focusing on user experience, especially on ease of use for new or casual users. This is a good thing, and enforced by the “consumerization” trend (“make it as simple as Dropbox or Google search”). In the process, a few power user features are even stripped from the UI.

Now combine this with the German trend to ignore metadata experts or even fire them (as the German newspaper and magazine industry has been doing for years):

Is the end result something that’s as polished and easy to use as Dropbox or Box, with very few additional features (since customers neglect their metadata, which would have made most of the difference) but at a higher price? Sounds like “specialize or die” to me…

Related – Klaus Sonnenleiter in Guru Talk on DAM as a commodity: “[DAM in 5 years] will be fully embedded. […] Digital assets will continue to be managed, but they will be managed inside a larger solution that handles marketing activities, sales platforms, publishing channels or whatever the primary activity of the company is.”

Update – Laurence Hart in Content Management Step One, Capture that Information: “No system where people actively store Content is ever considered a failure. […] If [Box and Dropbox] can get a strong foothold, show consistent high adoption, and while gradually increasing value organizations derive from using them, they are going to be major players. […] My money is on the companies that are innovating and trying new things while not losing sight of the fact that every organization is staffed by Consumers.”

Kate Matsudaira: Your Bad Boss Is Your Problem And It's Your Job To Fix It

Basile Simon: How We Are Exploring Mountains of Linked Data at BBC News Labs 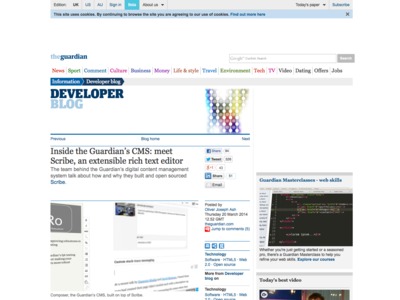 “The problem with all of these off-the-shelf solutions is their lack of extensibility. TinyMCE, for example, does an excellent job of producing the right markup, but much of the user interface for the editor is kept privately within the library, which made it difficult to augment the user experience we desired.

[…] If you’re in need of a rich text editor then we would love for you to try out Scribe. It’s a great starting place for building your own rich text editing experience, as you won’t have to deal with any of the pains introduced by contentEditable.”

Try the demo, and get the source code on GitHub.