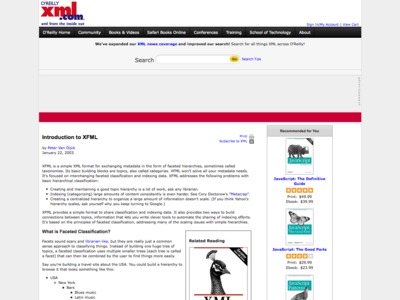 "XFML is a simple XML format for exchanging metadata in the form of faceted hierarchies, sometimes called taxonomies. Its basic building blocks are topics, also called categories. XFML won't solve all your metadata needs. It's focused on interchanging faceted classification and indexing data." 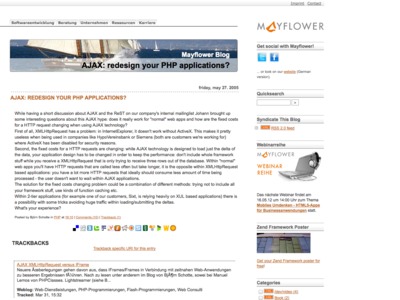 "First of all, XMLHttpRequest has a problem: in InternetExplorer, it doesn't work without ActiveX. This makes it pretty useless when being used in companies like HypoVereinsbank or Siemens (both are customers we're working for) where ActiveX has been disabled for security reasons.

Second, the fixed costs for a HTTP requests are changing: while AJAX technology is designed to load just the delta of the data, your application design has to be changed in order to keep the performance: don't include whole framework stuff while you receive a XMLHttpRequest that is only trying to receive three rows out of the database."

"'If you look at the history of LAMP development, they're really primative tools ... the so-called good enough model. The type of businesses being created around those particular business models are essentially going to have to grow up at some point. I believe that in the same way that some of those simple solutions are good enough to start with, eventually, they are going to have to come up against scalability,' Sabbah said during a press conference at the IBM Rational User Conference in Las Vegas.

[...] Sabbah said LAMP will be core to IBM's future software strategy but was tight-lipped on specifics. However, he told Builder AU that the company is looking to do more with the open source PHP programming language, and Zend Technologies, a firm that invests heavily in the development of PHP."

"How many developers do you know who complain about working nights and weekends manually entering connection information for thousands of publicly available web services? Given that there are, at most, a few dozen sites offering web services over the public web (and that's web services in the most general sense, including REST as well as SOAP), I'll guess that the answer is 'zero'.

So here's my suggestion: let's hold off on designing new specifications until there's a real problem to solve."

"Then, after the candidate tells me the story of the terrible bug, I ask the crucial follow-up: "What did you learn? What did you change about yourself?" The reaction is often telling, and I can easily see how self-aware she is. If the answer is "We fixed the bug and had to do some cleanup," then I know nothing's been learned. If she comes back with a "I'll tell you one thing: I made sure that my X always....", I know that she's a self-optimizing person." 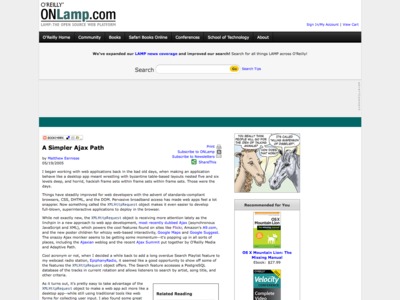 "While not exactly new, the XMLHttpRequest object is receiving more attention lately as the linchpin in a new approach to web app development, most recently dubbed Ajax (asynchronous JavaScript and XML). [...] As it turns out, it's pretty easy to take advantage of the XMLHttpRequest object to make a web app act more like a desktop app--while still using traditional tools like web forms for collecting user input."

"What I forgot about, as I suspect some of you have, too (or maybe I'm the only loser who didn't think of this (-; ), is that $_SERVER['PHP_SELF'] can be manipulated by the user."

"Oracle and Zend Technologies have entered into a partnership to develop an integrated solution designed to help developers build and deploy database-driven Web applications based on the popular PHP scripting language. We will make available Zend Core for Oracle, which is a fully tested and supported PHP 5 distribution that will include integration with Oracle Database 10g client libraries and will enable developers to get up and running in minutes with PHP and Oracle." 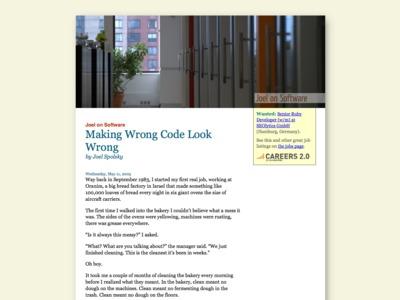 "The real point is that exceptions eliminate collocation. You have to look somewhere else to answer a question of whether code is doing the right thing, so you're not able to take advantage of your eye's built-in ability to learn to see wrong code, because there's nothing to see."