A good article on globalizing Oracle PHP applications, on the Oracle Technology Network:

"From the developers point of view, creating a globalized application introduces a new set of issues that need to be carefully planned from the early stages. Luckily, PHP offers all the necessary building blocks so that the developer can implement fully globalized applications. This document provides an introduction on how to effectively use these features when deploying in the Oracle Application Server. [...] The act of globalizing your application can be broken into four distinct stages:

"The majority of open source projects, such as Xchat and others, use Gettext to translate the messages and strings shown in their user interface to several languages. The same concept can easily be applied to a Web site or Web application, and that is the objective of this article."

"The Dublin Core metadata element set set is a standard for cross-domain information resource description." It consists of the following elements:

Migrating from PHP 4 to PHP 5

Tim Anderson's "Why Tablet PC? The pros and cons of keyboards versus handwriting input and review of Acer C110 or C111":

"When Tablet was first launched I was unsure of the format's long-term potential. I am deeply wedded to the keyboard, there is a hefty price premium, and twisting a Tablet screen to convert it struck me as fiddly, gimmicky and likely to break after extended use. I'm beginning to change my mind."

Rich Skrenta explains why only RAM is fast:

"A disk head seek is about 9ms, and the human perceptual threshold for what seems "instant" is around 50ms. So if you have just one head seek per user request, you can support at most 5 hits/second on that server before users start to notice latency. If you have a typical filesystem with a little database on top, you may be up to 3 seeks per hit already."

Helping Your Visitors: a State of Mind

"If you want people to know how to find what they want on your site, be sure the language you use is relevant to their needs.

At its simplest, this means avoiding corporate-speak and industry jargon. It means taking the trouble to find out which words and terms your visitors use when thinking about your products and services."

Looks great: "WordPress is a state-of-the-art semantic personal publishing platform with a focus on aesthetics, web standards, and usability." 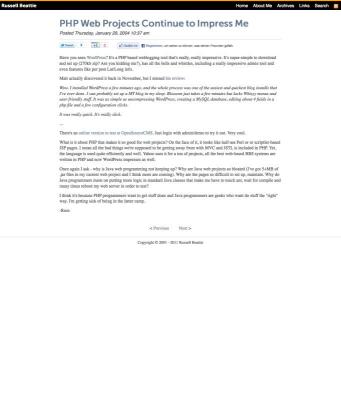 "What is it about PHP that makes it so good for web projects? On the face of it, it looks like half-ass Perl or or scriptlet-based JSP pages. I mean all the bad things we're supposed to be getting away from with MVC and JSTL is included in PHP. Yet, the language is used quite efficiently and well. Yahoo uses it for a ton of projects, all the best web-based BBS systems are written in PHP and now WordPress impresses as well.

Once again I ask - why is Java web programming not keeping up? Why are Java web projects so bloated (I've got 5 MB of .jar files in my current web project and I think more are coming). Why are the pages so difficult to set up, maintain. Why do Java programmers insist on putting more logic in standard Java classes that make me have to touch ant, wait for compile and many times reboot my web server in order to test?

I think it's because PHP programmers want to get stuff done and Java programmers are geeks who want do stuff the "right" way. I'm getting sick of being in the latter camp."

Harry Fuecks publishes a sample chapter on caching from his "PHP Anthology" book.

"The first web browser - or browser-editor rather - was called WorldWideWeb as, after all, when it was written in 1990 it was the only way to see the web. Much later it was renamed Nexus in order to save confusion between the program and the abstract information space (which is now spelled World Wide Web with spaces).

I wrote the program using a NeXT computer. This had the advantage that there were some great tools available -it was a great computing environment in general. In fact, I could do in a couple of months what would take more like a year on other platforms, because on the NeXT, a lot of it was done for me already. There was an application builder to make all the menus as quickly as you could dream them up. there were all the software parts to make a wysiwyg (what you see is what you get - in other words direct manipulation of text on screen as on the printed - or browsed page) word processor. I just had to add hypertext, (by subclassing the Text object)"

He's explaining his approach to using Model/View/Controller architecture in a PHP application. (Not very well written, in my opinion - writing good, clean tutorials IS hard...)

I want one of those: Charles F. Goldfarb's XML Handbook, Fifth Edition

Take a look at the sample chapters The XML usage spectrum (PDF) and XML for machines (PDF), they're nice to read.

Great programming font: Proggy! (Found it via Joel on Software.)

ZDNet UK has a fun article on Schwäbisch Hall's migration from Windows to Linux:

"Once the migration was completed, though, there were concerns that the open-source software would be harder to use than Windows. Again, Schwäbisch Hall had a solution.

"We put the chairwoman of our workers' council on stage in front of all the municipal workers, and showed her using the new system. After that, we found that no man would say that he couldn't use his PC now that everyone knew a woman could do it," revealed Bräuner."

"Internally, we are also leveraging RSS as a means of collaboration and communication for our software engineering teams. All engineers maintain blogs and use NewsAggregators to track tasks, projects, and new technology. In addition, we are tracking changes on our Wiki via RSS."

Gene Smith: "RSS and XML-based content syndication are really taking off. News organizations (like the NY Times) and business are increasingly using RSS to syndicate their content. RSS is also becoming the spam-free alternative to email newsletters.

Most RSS feeds are automagically generated from a content management system. As more feeds spring up, and more content is consumed through an RSS aggregator, content producers will need to think about how to create quality RSS feeds."

PHP Everywhere has a long article pointing to lots of resources on the topic: Tuning Apache and PHP for Speed on Unix.

Andy Oram has written a nice article on Linux Documentation which is also a good read when thinking about how to document your own software...

It probably makes sense to follow the standardized Utility Conventions when writing command line utilities (which we're doing in PHP a lot these days)...

See also the chapter on Command-Line Options in The Art of Unix Programming.

Must check out Nagios. ONLamp.com has an article about Nagios: "Nagios is a feature-rich network monitoring package. Its displays provide current information about system or resource status across an entire network. In addition, it can also be configured to send alerts and perform other actions when problems are detected."