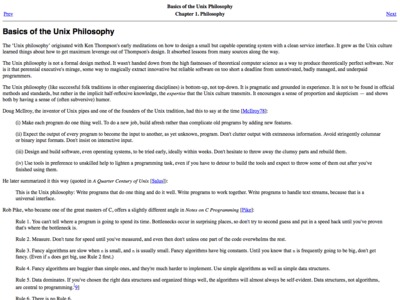 I keep coming back to Eric Steven Raymond’s 2003 Basics of the Unix Philosophy:

Rule of Clarity: Clarity is better than cleverness.

Rule of Composition: Design programs to be connected to other programs.

Rule of Simplicity: Design for simplicity; add complexity only where you must.

Rule of Parsimony: Write a big program only when it is clear by demonstration that nothing else will do.

Rule of Transparency: Design for visibility to make inspection and debugging easier.

Rule of Robustness: Robustness is the child of transparency and simplicity.

Rule of Representation: Fold knowledge into data so program logic can be stupid and robust.

Rule of Least Surprise: In interface design, always do the least surprising thing.

Rule of Silence: When a program has nothing surprising to say, it should say nothing.

Rule of Repair: When you must fail, fail noisily and as soon as possible.

Rule of Economy: Programmer time is expensive; conserve it in preference to machine time.

Rule of Optimization: Prototype before polishing. Get it working before you optimize it.

Rule of Diversity: Distrust all claims for "one true way".

Rule of Extensibility: Design for the future, because it will be here sooner than you think.”