Shanley Kane: How the Productivity Myth is Killing Your Startup 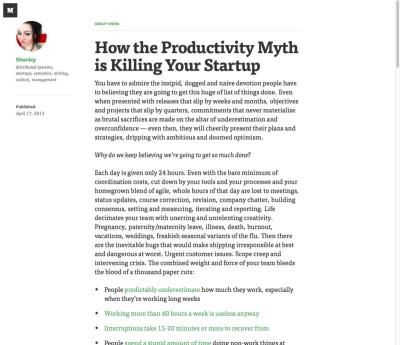 Shanley Kane – How the Productivity Myth is Killing Your Startup:

“You have to admire the insipid, dogged and naive devotion people have to believing they are going to get this huge of list of things done.

[…] All 10 projects are delivered late and half-assed. This is most sad for project number 4, which was the most important project of them all, and could have been completed and damn well if everyone had just worked on that.

[…] Create a culture of truthfulness about productivity by continually comparing plans, roadmaps, and strategies to their actual results — often the number of things that were cut, late, or done poorly will shock and awe. What would you have done differently if you knew what was actually possible from the onset?”