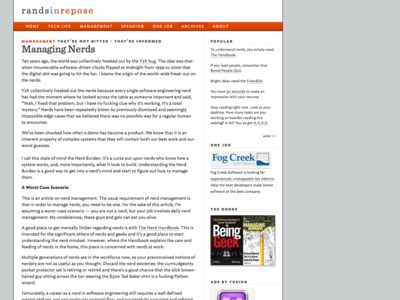 Michael Lopp (Rands In Repose) back in January 2011 – Managing Nerds:

“Amaze your nerd. Build calm and dark places where invoking the Zone is trivial. Perform consistently and efficiently around your nerd so they can spend their energy on what they build and not worry about that which they can’t control. Help them scale by knowing when they’re stuck or simply bored. And let them chase those Highs because then they can amaze everyone.”