My favourite quotes from the Valve Handbook for new employees

“As individuals we tend to gravitate toward projects that have a high, measurable, and predictable return for the company. So when there’s a clear opportunity on the table to succeed at a near-term business goal with a clear return, we all want to take it. […] This sounds like a good thing, and it often is, but it has some downsides that are worth keeping in mind. Specifically, if we’re not careful, these traits can cause us to race back and forth between short-term opportunities and threats, being responsive rather than proactive. […] It’s up to all of us to spend effort focusing on what we think the long-term goals of the company should be.”

“It’s natural in this kind of environment to constantly feel like you’re failing because for every one task you decide to work on, there will be dozens that aren’t getting your attention. Trust us, this is normal.”

“Can I be included the next time Valve is deciding X?

“Often, someone will emerge as the “lead” for a project. This person’s role is not a traditional managerial one. Most often, they’re primarily a clearinghouse of information. They’re keeping the whole project in their head at once so that people can use them as a resource to check decisions against. The leads serve the team, while acting as centers for the teams.”

“Over time, we have learned that our collective ability to meet challenges, take advantage of opportunity, and respond to threats is far greater when the responsibility for doing so is distributed as widely as possible. Namely, to every individual at the company.”

“How much shippable (not necessarily shipped to outside customers), valuable, finished work did you get done?”

“How much of your work matters to the product? How much did you influence correct prioritization of work or resource trade-offs by others? Are you good at predicting how customers are going to react to decisions we’re making?”

“We believe that high-performance people are generally self-improving.”

“In some ways, hiring lower-powered people is a natural response to having so much work to get done. In these conditions, hiring someone who is at least capable seems (in the short term) to be smarter than not hiring anyone at all. But that’s actually a huge mistake.”

If you think that's what we want, why don't you give it to us? 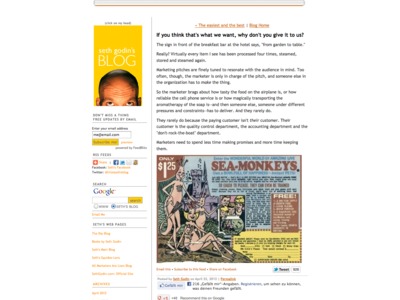 Seth Godin – If you think that's what we want, why don't you give it to us?:

“So the marketer brags about how tasty the food on the airplane is, or how reliable the cell phone service is or how magically transporting the aromatherapy of the soap is--and then someone else, someone under different pressures and constraints--has to deliver. And they rarely do.” 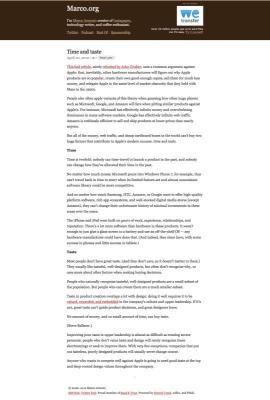 “Time is twofold: nobody can time-travel to launch a product in the past, and nobody can change how they’ve allocated their time in the past.

[…] And no matter how much Samsung, HTC, Amazon, or Google want to offer high-quality platform software, rich app ecosystems, and well-stocked digital media stores (except Amazon), they can’t change their unfortunate history of minimal investments in these areas over the years.

Anyone who wants to compete well against Apple is going to need good taste at the top and deep-rooted design values throughout the company.” 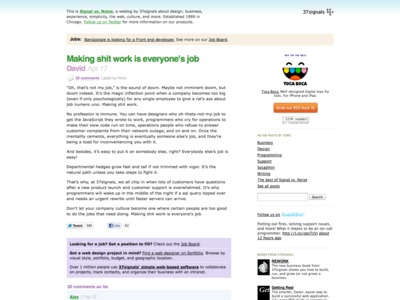 “You can have […] programmers who cry for operations to make their slow code run on time, operations people who refuse to answer customer complaints from their network outage, and on and on. Once the mentality cements, everything is eventually someone else’s job, and they’re being a toad for inconveniencing you with it.”

Picture This: Hosted Lifebits in the Personal Cloud 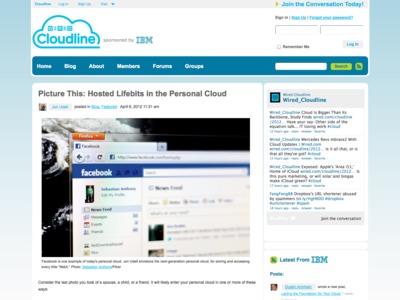 Jon Udell – Picture This: Hosted Lifebits in the Personal Cloud:

“I want a service that will consolidate my digital photos and take care of them for generations to come, migrating them to new media and formats as the old ones go extinct.

[…] I want a service that will enable me to define an access group, such as friends and family, independently of any silo. I want to share photos once to that group. ” 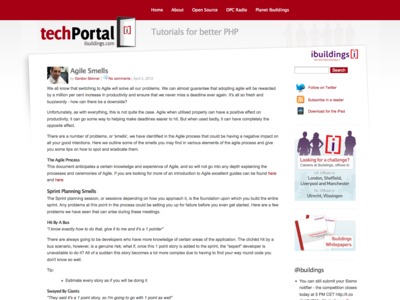 “There are a number of problems, or 'smells', we have identified in the Agile process that could be having a negative impact on all your good intentions.”

These are the ones I recognize from our Scrum practice: “Hit By A Bus”, “Fuzzy Definition Of Done”, “Anonymous Author’s Task”, “Premature Architecture”, “Ramble On”, “Turn Up, Tune In, Drop Out”, “Hidden Impediment”, “Off Topic”, “Memory Problems”, “Problem Solving”, “Pulling the thread”, “Scope Creep”, “Practising Insanity”…