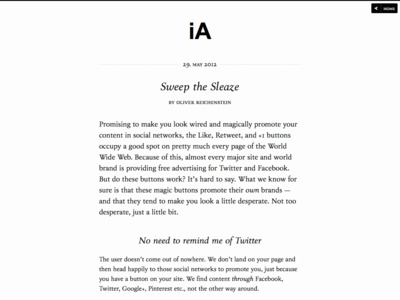 “Don’t worry. These buttons will vanish. The previous wave of buttons for Delicious and Digg and Co. vanished, Facebook and Twitter and G+ might vanish or they might survive, but the buttons will vanish for sure. Or do you seriously think that in ten years we will still have those buttons on every page? No, right? Why, because you already know as a user that they’re not that great. So why not get rid of them now?”