No multitasking for teams either 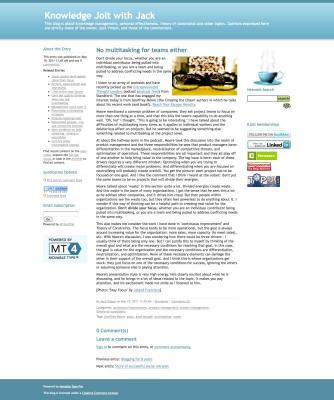 Jack Vinson – No multitasking for teams either:

"[Geoffrey] Moore mentioned a common problem of companies: they ask project teams to focus on more than one thing at a time, and that this kills the team's capability to do anything well.

[…] You get the picture: each project has to be focused on one goal. And I like the comment that I think I heard at the outset: don't put the same teams to be on projects that will divide their energies."

Bug statistics are a waste of time 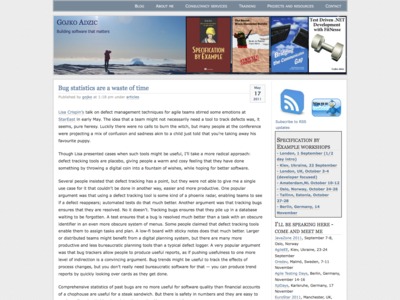 Gojko Adzic – Bug statistics are a waste of time:

"A frequent excuse for bug reports is that the management needs them to know the current quality status. […] Alan Weiss explained that nicely in Million Dollar Consulting:

Instead of reporting things that are easy to measure but have low value, why not spend a bit more time actually defining what quality is and report that?"

The future of the library

Seth Godin – The future of the library:

"There are one thousands things that could be done in a place like this, all built around one mission: take the world of data, combine it with the people in this community and create value.

We need librarians more than we ever did. What we don't need are mere clerks who guard dead paper. Librarians are too important to be a dwindling voice in our culture. For the right librarian, this is the chance of a lifetime."

"Brand humility is the only response to a fast-changing and competitive marketplace. The humble brand understands that it needs to re-earn attention, re-earn loyalty and reconnect with its audience as if every day is the first day."

The 13 Areas of Cost for a DAM System 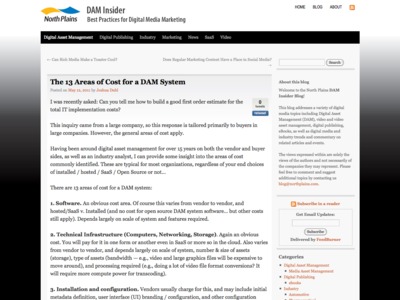 Joshua Duhl – The 13 Areas of Cost for a DAM System:

"In almost every successful DAM installation (hosted or not) that I am aware of has 1-3 people (depending on the size and breadth of the organization) who is/are the DAM “master(s)” – more than a librarian or governance provider for the assets, this role(s) oversees the DAM from a combined business use and technical perspective. It expands and updates the metadata model (assuming the system supports that after it’s initially established  , enforces consistency, updates the folder/collection hierarchy for consistent access, and is usually involved in the soliciting, vetting and resolving all modifications to the system."

"The salesperson's job: Help people overcome their fear so they can commit to something they'll end up glad they invested in.

The goal of a marketer ought to be to make it so easy to be a salesperson, you're merely an inviter. The new marketing is largely about this – creating a scenario where you don't even need salespeople. (Until you do.)"