Shortchanging Your Business with User-Hostile Platforms 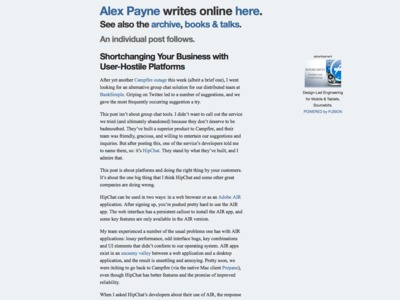 "My team experienced a number of the usual problems one has with AIR applications: lousy performance, odd interface bugs, key combinations and UI elements that didn’t conform to our operating system. AIR apps exist in an uncanny valley between a web application and a desktop application, and the result is unsettling and annoying.

[…] Cross-platform solutions like AIR might be better for your business in the short term, but your customers probably hate it, and you could be shortchanging yourself in the long run. If there’s a market, spend the time and money to build proper native desktop and mobile apps. If you don’t think there’s a market but the demand is there, expose an API to your service, let inspired developers build native apps, and see what happens."

Jon Udell – Seven ways to think like the web:

"Nobody else cares about your data as much as you do. If other people and other systems source your data from a canonical URL that you advertise and control, then they will always get data that’s as timely and accurate as you care to make it.

"Writing code, like writing long essays like this one, is not something you can do in an environment with lots of interruptions. One interruption at the wrong time can set you back by hours as the map falls out of your head. Programming and writing are both intellectual acts. So why would you expect great results from a crowded, smelly room that people have been living in for 24 hours.

[…] I would also insist that every student, without exception, run their own server. […] That server will play the same role that a cadaver plays for a medical student. It's a place for them to make mistakes, to gain experience, to gain rational and realistic fears, but not unnecessary ones."

"With some DAM vendors eager to tout the benefits of SaaS as a way to get around draconian IT departments and reduce deployment headaches, SaaS inevitably encourages increased commoditisation and makes it easier for the lower cost providers to directly compete with them.  Box.net and their ilk may ironically help bolster the position of enterprise vendors and sharpen the dividing line between enterprise and commodity solutions to the detriment of the mid-range DAM SaaS vendor.

[…] It remains to be seen how far box.net will progress in DAM, but the message is clear for DAM vendors, if your product has poor usability or fails to offer clear and compelling benefits over low cost commodity services then you stand to lose out over the medium-long term."

"If Evernote’s desktop clients were written in Adobe AIR, I’d be worried right now. The immediate popularity of the Mac App Store, and the iPhone App Store before it, reinforces my belief that in a world of infinite software choice, people gravitate towards the products with the best overall user experience. It’s very hard for something developed in a cross-platform, lowest-common-denominator technology to provide as nice an experience as a similar native app.

As the CEO of a software company, I wish this weren’t true. I’d love to build one version of our App that could work everywhere. Instead, we develop separate native versions for Windows, Mac, Desktop Web, iOS, Android, BlackBerry, HP WebOS and (coming soon) Windows Phone 7. We do it because the results are better and, frankly, that’s all-important."

What Is a Curator in Chief?

Fast Company – What Is a Curator in Chief?:

"Machines may evolve, but they'll never have a human sense of relevance. "As curator, I need "gut instinct". As I'm scanning the web (with our tools), I sometimes find sources or articles that I think are valuable--even though they might not be a perfect match to our customers' specifications. In essence, the curator curates not only the content, but also the technology so that the results are always improving while the algorithmic rules are adapting."

Can't get quality thinking when you are multitasking 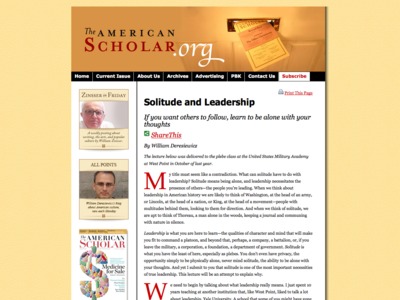 Jack Vinson points to Solitude and Leadership by William Deresiewicz – Can't get quality thinking when you are multitasking:

"Deresiewicz makes the connection to one's ability to think and develop their own opinions and thoughts on a matter. Multitasking prevents this, just as it damages quality and safety. And the solution is similar: give yourself (and your people) the direction needed to focus on ONE THING AT A TIME."

[…] they really want engineers to publicly own products and be the main point of contact for the things they built.

[…] Engineers handle entire feature themselves — front end javascript, backend database code, and everything in between.  If they want help from a Designer (there are a limited staff of dedicated designers available), they need to get a Designer interested enough in their project to take it on."

We discussed the poll results with a few DAM specialists, including CMS Watch analyst Theresa Regli. "

Confessions of a jerk

Andrew Stellman – Confessions of a jerk:

"I perfected all of the programmer stonewalling tricks to get people to stop asking me questions: interrupting people with pedantic questions before they’d barely started getting to the point, sending people back with half-answers so I didn’t have to think through the question I was being asked, answering questions in a way that was obviously far too technical for whoever I was talking to so. And heaven help anyone who said something to me that was technically inaccurate."

"Twitter is a wonderful solution to many of the problems we had with RSS, most importantly, how to go from the impulse to subscribe to having actually subscribed. In Twitter it's one click. In RSS, it's an unpredictable number of complex clicks. That in a nutshell is why Twitter blossomed.

[…] It always takes longer than you think it should, but eventually the open formats and protocols replace the systems built on corporate training wheels."

In defense of RSS

Seth Godin – In defense of RSS:

"RSS is quiet and fast and professional and largely hype-free. Perhaps that's why it's not the flavor of the day."