"But those old-fashioned constraints of printing can also be a benefit. There’s something satisfying, predictable and achievable about a more-or-less fixed amount of stuff to read appearing on a regular schedule.

For example, when faced with most news websites one of the reasons I don’t spend much time reading them is because I know I can never finish, no matter how much I read. So, once I’ve read the front page headlines and realised the world hasn’t ended, why read much more? I’ll never finish it all anyway."

(Via Derek Powazek and Today's Guardian.)

Does the Internet Make You Smarter? 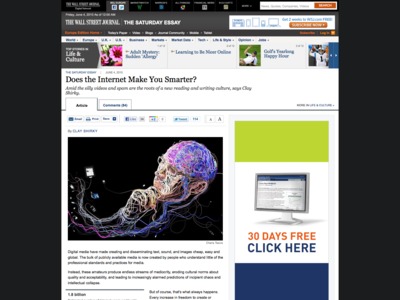 Clay Shirky at WSJ.com – Does the Internet Make You Smarter?:

"We are living through a similar explosion of publishing capability today, where digital media link over a billion people into the same network. This linking together in turn lets us tap our cognitive surplus, the trillion hours a year of free time the educated population of the planet has to spend doing things they care about. In the 20th century, the bulk of that time was spent watching television, but our cognitive surplus is so enormous that diverting even a tiny fraction of time from consumption to participation can create enormous positive effects."

Why Everything Sucks, Why That’s Awesome, and How It’s Changing Us 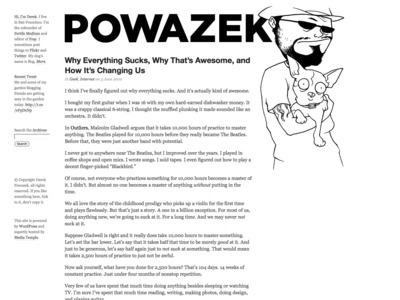 Derek Powazek – Why Everything Sucks, Why That’s Awesome, and How It’s Changing Us:

"Just think about the millions of people on the internet, each in their own timeline of learning something new. Most people will never get to 2,500 hours. They’ll never not suck. It’s not personal, it’s just math.

So that’s why the vast majority of everything on the internet sucks. It’s because most of the people doing it, most of the time, just haven’t put in the hours yet."