"To help illustrate Facebook's shift away from privacy, we have highlighted some excerpts from Facebook's privacy policies over the years. Watch closely as your privacy disappears, one small change at a time!"

Carsonified has a video and transcript of Fred Wilson’s 10 Golden Principles of Successful Web Apps:

Mac & the iPad, History Repeats Itself

"Steve assembles and motivates a small team of young geniuses, then sets them to work for “90 hours a week and loving it.” The results are highly-integrated designs that far outpace the competition.

It is this small-team approach that, of necessity, results in important capabilities being left out of the first release. The payoff, though, is that Steve ends up with a central core of perfectly-integrated functionality instead of a rambling labyrinth of disjointed “features.” This design framework is so well conceived that it can be built upon for years, even decades, without being stripped out and restarted."

"Gmail started off with the awful input type="file" "add more" typical solution that we all know and love. Then they added the ability to select multiple files via Flash.... and now they allow the ability to drag and drop files right onto the message compose using HTML5 standards."

3 Rules for Building Features in a Lean Startup

Ash Maurya – 3 Rules for Building Features in a Lean Startup:

Even though building a product is the purpose of a startup, product development actually gets in the way of learning about customers.

While we can’t eliminate development/QA or increase customer learning during those stages, we can shorten the cycle time from requirements to release so we get to the learning parts faster. That is exactly what Continuous Deployment does."

The bizarre WePad launch – A chaotic press demo, only video of the UI

Neofonie tries to surf the iPad hype wave, but all they've been able to show so far was a fake WePad…

Markus Goebel at TechCrunch Europe – The bizarre WePad launch – A chaotic press demo, only video of the UI:

"The widget-oriented user interface runs smooth on Intel’s Atom Pineview-M chip […]. At least that’s what I believed until I had to realize that the entire demonstration was just a screencast.

The only demo device in the room was running Windows 7 and a fullscreen video to give an impression of the WePad UI."

"Few companies have Google-sized datasets though. The average sites you see, they're 10-20 gigs of data. Moving to a MapReduce solution for 20 gigs of data, or even for a terabyte or two of data, makes no sense. Using MapReduce with NoSQL solutions for small sites? This happens because people don't understand how to pick the right tools."

"You see, no matter how much you love your product, unless it’s perfect, it’s causing pain to somebody. I’m sure it’s not on purpose. You’re not a monster. But something about your product is confusing or hard to use, and it’s driving at least one of your customers nuts.

Again, examine them. Find out when they feel the most pain while using your product. Watch brand new people use your product to see how much pain it takes to learn. Watch old customers use your product to figure out what weird workarounds they've created to avoid the pain that you’re causing them.

Find all the pain points. Then come up with devastatingly clever ways to fix them."

Learning is better than optimization (the local maximum problem) 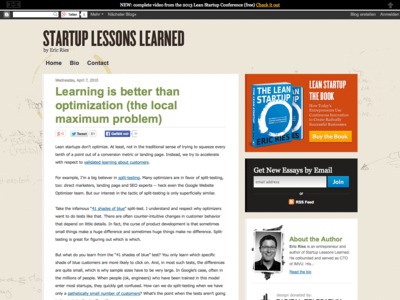 "It takes some getting used to for most designers, though. They are not generally used to having their designs evaluated by their real-world impact. Remember that plenty of design organizations and design schools give out awards for designing products that never get built. So don’t hold it against a classically trained designer if they find split-testing a little off-putting at first.

[…] Teams that focus on optimizing can get stuck bolting on feature upon feature until the product becomes unusable. No one feature is to blame. […] When that happens, the solution is to do a whole product pivot. […] A whole product is one that works for mainstream customers. Sometimes, a whole product is much bigger than a simple device - witness Apple's mastery of creating a whole ecosystem around each of their devices that make them much more useful than their competitors. But sometimes a whole product is much less - it requires removing unnecessary features and focusing on a single overriding value proposition."

A 2.5 Year-Old Uses an iPad for the First Time

Todd Lappin – A 2.5 Year-Old Uses an iPad for the First Time:

"My iPhone-savvy 2.5 year-old daughter held an iPad for the very first time last night, and it turned out to be an interesting user-interface experiment."

The iPad and computing's middle ground

"I have to wonder where we'll see iPads a few months or years from now. I bet some of the places they'll show up aren't yet obvious.

[…] Would you carry a laptop around a soccer field? Would you want to track game stats on an iPhone while shouting encouragement to the players? Neither of those quite work, but the iPad, replacing the coach's old clipboard, could easily make that environment a better one for computing."

"Speed Is A Feature · For a 1Ghz device with limited memory, the iPad is unreasonably fast. I suspect this accounts for a whole bunch of the “Wow!” reaction the iPad obviously provokes."

How friends help friends on the Internet: The Ross Greenberg Story 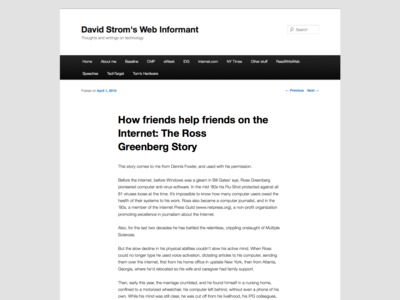 David Strom – How friends help friends on the Internet: The Ross Greenberg Story:

"Then, early this year, the marriage crumbled, and he found himself in a nursing home, confined to a motorized wheelchair, his computer left behind, without even a phone of his own. While his mind was still clear, he was cut off from his livelihood, his IPG colleagues, the internet, the world.

Ross’s plight came to the attention of the IPG when, through the generosity of Rebecca, the home’s administrator, he painstakingly pecked out a brief e-mail, using one finger, to a fellow IPG member."

The iPad Launch: Can Steve Jobs Do It Again? 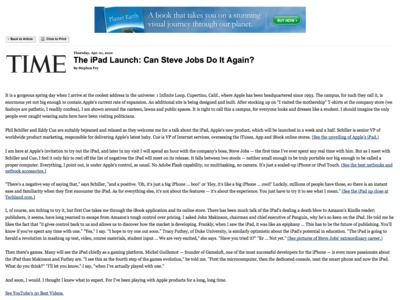 Stephen Fry at TIME – The iPad Launch: Can Steve Jobs Do It Again?:

"It is possible that the public will not fall on the iPad, as I did, like lions on an antelope. Perhaps they will find the apps and the iBooks too expensive. Maybe they will wait for more fully featured later models. But for me, my iPad is like a gun lobbyist's rifle: the only way you will take it from me is to prise it from my cold, dead hands. One melancholy thought occurs as my fingers glide and flow over the surface of this astonishing object: Douglas Adams is not alive to see the closest thing to his Hitchhiker's Guide that humankind has yet devised."

The Collapse of Complex Business Models

"Some video still has to be complex to be valuable, but the logic of the old media ecoystem, where video had to be complex simply to be video, is broken. Expensive bits of video made in complex ways now compete with cheap bits made in simple ways."