Giving Up On Patents

Tim Bray – Giving Up On Patents:

"The patent system needs to be torn down and thrown out.

[…] And here are a few words for the huge community of legal professionals who make their living pursuing patent law: You’re actively damaging society. Look in the mirror and find something better to do."

Morgan Adams at RoughlyDrafted Magazine – An Adobe Flash developer on why the iPad can’t use Flash:

"I’m a full-time Flash developer and I’d love to get paid to make Flash sites for iPad. I want that to make sense—but it doesn’t. Flash on the iPad will not (and should not) happen—and the main reason, as I see it, is one that never gets talked about:

Current Flash sites could never be made work well on any touchscreen device, and this cannot be solved by Apple, Adobe, or magical new hardware.

That’s not because of slow mobile performance, battery drain or crashes. It’s because of the hover or mouseover problem."

Quote: The thing [our clients] bring to the table

Ryan Singer cites Eric Evans' Putting the model to work presentation at Signal vs. Noise – Quote: The thing [our clients] bring to the table:

"We need to be good enough to know how to do the implementation. But the thing that we bring that’s really critical to the process is we think sharply. We are able to abstract and we are able to define things crisply." 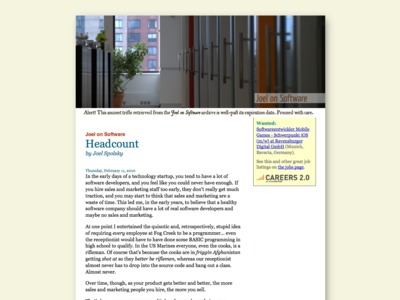 "If everybody in the world knew about your software and was encouraged to evaluate it, the number that would buy it would be (Earth population) x Quality.

[…] Double the quality, and the same sales effort yields double the revenue.

[…] The offshoring that does happen is strongly biased to custom software development which, by design, can only solve one person’s problem, so more developers than marketers are needed."

"I’ve come to expect, of my technical and business peers, that they will be well-informed to an extent that would have been very rare even a couple of decades ago. Can you skip this and still make a difference in the world? I don’t know, but it does seem that we are sorting ourselves into tribes based on the intensity of our listening." 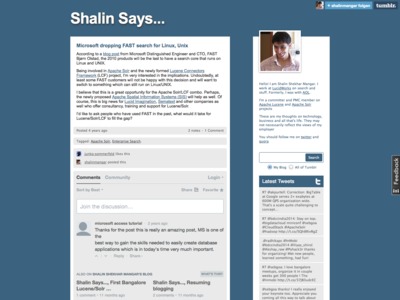 "According to a blog post from Microsoft Distinguished Engineer and CTO, FAST Bjørn Olstad, the 2010 products will be the last to have a search core that runs on Linux and UNIX.

Being involved in Apache Solr and the newly formed Lucene Connectors Framework (LCF) project, I’m very interested in the implications."

"For those of us surrounded by the minutiae of computers all day, it’s easy to forget there’s a world of people out there who just don’t get it. And it’s not their fault. It’s ours.

Apple has decided it’s worth throwing out advanced features in order to get these people onboard. Anyone who builds apps would be wise to consider taking a similar path."

It's not a promise, it's a guess

David Heinemeier Hansson at Signal vs. Noise – It's not a promise, it's a guess:

"Since nobody likes to be a failure, they’ll indulge in risky behavior to avoid it, like burning the midnight oil and checking in bad code with shanty or no tests.

Rushing to meet your estimate promise once or twice might be bearable, but it’s ultimately unsustainable. Software development is inherently unpredictable. There are just too many moving parts and ice tips that turn out to be icebergs."

The iPad is real-life social

Edd Dumbill at O'Reilly Radar - The iPad is real-life social:

"After reading one such blog post saying that the iPad was antisocial, because it didn't have SMS or the ability to run IM in the background, it struck me this was a restricted view of what it means to be social.

The iPad is real-life social in a way that a phone and a laptop just aren't. You really can just hand it to someone to show them what you mean: share photos, videos, writing with real people right next to you."