"You’d be surprised at how often programmers are completely unaware that they have serious UX [user experience] and usability problems. Just a few days ago, someone told me, “Our users are using our software, so we don’t have any usability issues!”

One of my favorite sayings is that there are only a few ways to do something right, but a million ways to do it wrong. Usability is no exception. […] Good UX is designed in from the beginning; bad UX can show up at any point along your project."

Quote: The number one competitor we have in our…

Signal vs. Noise cites David Heinemeier Hansson – Quote: The number one competitor we have in our…:

We have to be just one step above that."

Why "Delivering Happiness" is a must read

Linda Stone at O'Reilly Radar – Why "Delivering Happiness" is a must read:

"At many companies, software developers are rewarded for knocking out the list of features and cranking toward the release date with no emphasis on the quality of the feature being checked. Does it work? Check. Tests ran? Check. Is anyone asking if it's contributing to the excellence of the product or service?"

Sure, but what's the hard part?

Seth Godin – Sure, but what's the hard part?:

"Hard is not about sweat or time, hard is about finishing the rare, valuable, risky task that few complete.

Don't tell me you want to launch a line of spices but don't want to make sales calls to supermarket buyers. That's the hard part."

Credit where credit is due

Google News Blog – Credit where credit is due:

"News publishers and readers both benefit when journalists get proper credit for their work. That can be difficult, with news spreading so quickly and many websites syndicating articles to others. That’s why we’re experimenting with two new metatags for Google News: syndication-source and original-source. Each of these metatags addresses a different scenario, but for both the aim is to allow publishers to take credit for their work and give credit to other journalists."

"A tech company should be run by engineers, not managers.

[…] From its lack of bureaucracy within projects, to its engineer-focused culture, to its emphasis on passionate and loyal employees, the huge company has maintained the corporate culture of its startup days."

The End Of The Road For Web Services 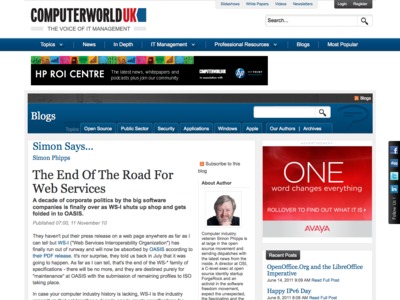 Simon Phipps at ComputerWorld UK – The End Of The Road For Web Services:

"In the end Web Services became an intranet tool for most uses, rendering the "W" incorrect even if WS* will be with enterprise developers for years to come as a kind of architectural COBOL.

Whatever other origins it had, the whole movement was, as far as my own experience recalls, transmitted around the industry by a senior analyst from a large analyst firm visiting all the key players and asking them about their "web services strategy".  As a consequence they all assumed Web Services were a key strategy for their competitors and put huge effort into devising a strategy of their own." 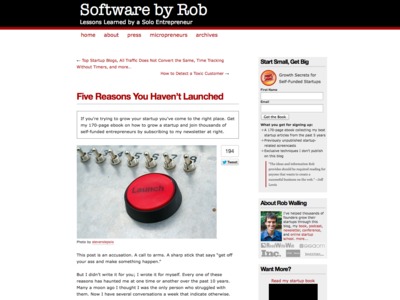 "If you’ve not working directly with at least two customers you have no idea if what you’re building is adding value. Or a total waste of time."

1.0 is the Loneliest Number

Matt Mullenweg – 1.0 is the Loneliest Number:

"Usage is like oxygen for ideas. You can never fully anticipate how an audience is going to react to something you’ve created until it’s out there. That means every moment you’re working on something without it being in the public it’s actually dying, deprived of the oxygen of the real world."

Werner Vogels: You build it; you run it 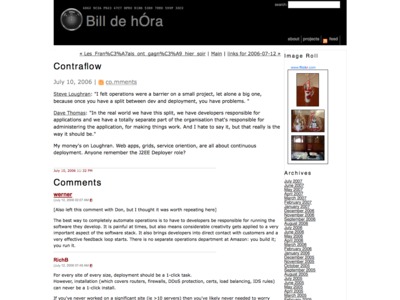 Werner Vogels of Amazon.com in a blog comment back in 2006:

"The best way to completely automate operations is to have to developers be responsible for running the software they develop. It is painful at times, but also means considerable creativity gets applied to a very important aspect of the software stack. It also brings developers into direct contact with customers and a very effective feedback loop starts. There is no separate operations department at Amazon: you build it; you run it."

(Via Sam Ruby and Don Box.)

Update: See also the in-depth article A Conversation with Werner Vogels (also from 2006). 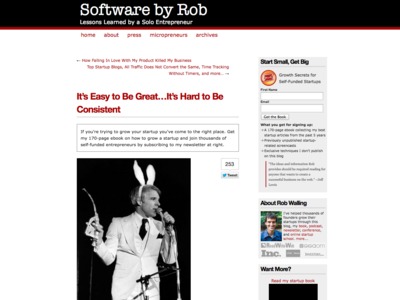 Rob Walling – It’s Easy to Be Great…It’s Hard to Be Consistent:

Yep, it’s tons of fun to think of ideas. And it’s easy.

But finishing the implementation of an idea? Seeing it through the 4-6 months (or more if you’re playing with fire) until it turns into a real product? That’s when it starts to get rough."

"When a copy editor applies a real or virtual red pencil to a piece of journalistic prose, he or she is likely to use weird spellings: hed for head (headline), dek for deck (subhead), lede for lead (first paragraph). The idea is that these intentional misspellings will help distinguish an editor's commentary from a writer's prose.

Whether this is a useful convention or just an antiquated habit I really can't say. But the principle of heads, decks, and leads matters more than ever, and not just in journalism." 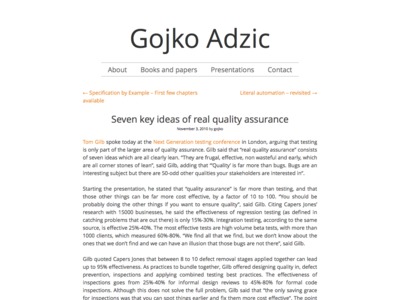 "“You don’t get quality by testing it in, you get it by designing it in”, said [Tom] Gilb. Many business users never define what they actually want in a measurable way according to Gilb, which is why projects do not meet the expected levels of quality by design. “To do quality assurance, you need to be able to quantify qualities important for your business”, said he, adding that “you have to define robustness and intuitiveness, and to define it you need to define a scale of measure”. He gave an example of intuitiveness, which can be defined by how long it takes for new people to do a task."

Steve Yegge back in 2006 – (Not) Managing Software Developers:

"I think the best managers don't want to manage: they want to lead. In fact most leaders probably don't think about it much, at least at first, because they're too busy leading: rushing headlong towards a goal and leading everyone around them in that direction, whether they're on the team or not. Leadership stems from having a clear vision, strong convictions, and enough drive and talent to get your ideas and goals across to a diverse group of people who can help you achieve them. If you have all that, you're close. Then you just need empathy so you don't work everyone to death. If you're a great leader, you can put the whip away; everyone will give you everything they've got."

The Many Forms of a Single Fact

William Kent back in 1988 – The Many Forms of a Single Fact:

"There is an underlying fallacy, namely the assumption that a simple binary fact (relationship or attribute) always maps simply into a pair of fields. While that is the foundation of current data design methodologies, there exist a troublesome number of exceptions in practice."