Michal Zalewski – HTTP cookies, or how not to design protocols:

"There is simply no accurate, offcial account of cookie behavior in modern browsers; the two relevant RFCs, often cited by people arguing on the Internet, are completely out of touch with reality. This forces developers to discover compatible behaviors by trial and error - and makes it an exciting gamble to build security systems around cookies in the first place."

NoSQL Took Away The Relational Model And Gave Nothing Back

Todd Hoff at High Scalability – NoSQL Took Away The Relational Model And Gave Nothing Back:

"With NoSQL all relationships have been pushed back onto the poor programmer to implement in code rather than the database managing it. We've sacrificed usability. NoSQL is about concurrency, latency, and scalability, but it's not about data." 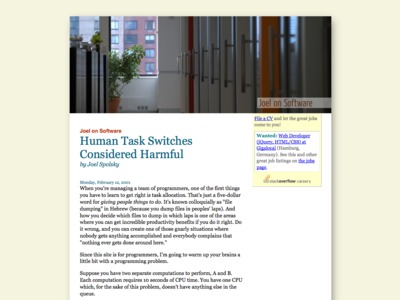 "I feel like when I have two programming projects on my plate at once, the task switch time is something like 6 hours. In an 8-hour day, that means multitasking reduces my productivity to 2 hours per day. Pretty dismal.

As it turns out, if you give somebody two things to work on, you should be grateful if they "starve" one task and only work on one, because they're going to get more stuff done and finish the average task sooner. In fact, the real lesson from all this is that you should never let people work on more than one thing at once."

"Rule #1: Use best judgment in all situations. There will be no additional rules."

"The alternative, it seems, is to organize for joy. These are the companies that give their people the freedom (and yes, the expectation) that they will create, connect and surprise. These are the organizations that embrace someone who makes a difference, as opposed to searching for a clause in the employee handbook that was violated."

Beware big vendors if you care about viability

Tony Byrne at the Real Story Group blog – Beware big vendors if you care about viability:

"Two decades and much gray hair later, I've come to the conclusion that the very biggest vendors can actually carry the highest risks in terms of product continuity. IBM, Microsoft, Oracle, EMC, Google, and SAP aren't going to fail as companies, but they will kill individual products at the drop of the hat."

A Search Market Craters - Welcome to the App Diaspora 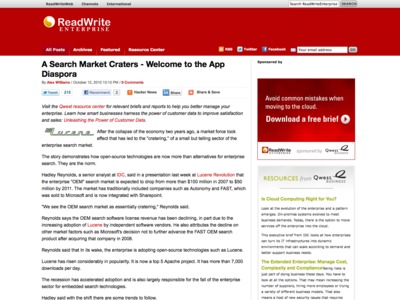 "After the collapse of the economy two years ago, a market force took effect that has led to the "cratering," of a small but telling sector of the enterprise search market.

The story demonstrates how open-source technologies are now more than alternatives for enterprise search. They are the norm." 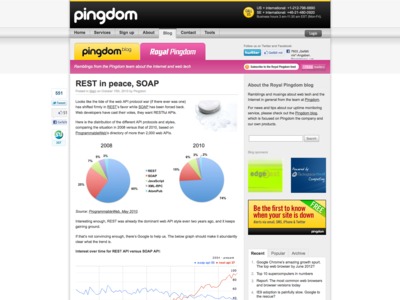 "Looks like the tide of the web API protocol war (if there ever was one) has shifted firmly in REST’s favor while SOAP has been forced back. Web developers have cast their votes, they want RESTful APIs."

Why SaaS Vendors and Buyers Need to Care About APIs

GetApp.com – Why SaaS Vendors and Buyers Need to Care About APIs:

"Saas vendors should offer open APIs to integrate with other products and make the life of their clients easier and safer. As John Musser, founder of ProgrammableWeb.com, recently said: “Not having an API in 2010 is like not having a web site in 2001.”"

"Risking the appearance of weakness takes strength. And the market knows it."