The iPad Is The Gadget We Never Knew We Needed

Wilson Rothman at Gizmodo – The iPad Is The Gadget We Never Knew We Needed:

"The iPad has shortcomings, but they only betray Apple's caution, just like what happened with iPhone No. 1. Now every 15-year-old kid asks for an iPhone, and the ones that don't get them get iPod Touches.

We can sit here in our geeky little dorkosphere arguing about it all day, but as much as Apple clearly enjoys our participation, the people Jobs wants to sell this to don't read our rants. They can't even understand them. My step-mother refuses to touch computers, but nowadays checks email, reads newspapers and plays Solitaire on an iPod Touch, after basically picking it up by accident one day. That's a future iPad user if I ever saw one." 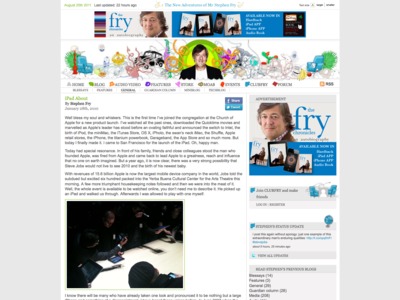 "Like iPhone 1.0 […] iPad 1.0 is still fantastic enough in its own right to be classed as a stunningly exciting object, one that you will want NOW and one that will not be matched this year by any company.

The 6 hidden costs of running a DAM system

TWEAK Digital – The 6 hidden costs of running a DAM system:

"For some reason, desktop applications are just accepted as-is. DAM software is expected to do everything imaginable and be easily customizable."

Show and Sell: The Secret to Apple's Magic

Joel Johnson at Gizmodo – Show and Sell: The Secret to Apple's Magic:

"Consumer audiences have grown wary of nearly a century of predictable sleight-of-hand. We've seen too many companies promise us the future, then fail to deliver it.

I believe that there are dozens of companies out there with the talent to pull the future toward us along some retail tesseract. But until they conquer their stage fright, leave aside the vaudevillian antics that savvy, jaded audiences no longer find compelling, and embrace a more honest and practical sort of conjuration, Apple will continue to be the defining technology performance of our age."

You can always do less

David Heinemeier Hansson at Signal vs. Noise – You can always do less:

"Most software has a tiny essence that justifies its existence, everything after that is wants and desires mistaken for needs and necessities.

The easiest way to force the insight of what can be lived without is by playing a game of constraints: You have to ship on Friday, you can’t add more people, you can’t work nights. […] It’s amazing how creative the cuts and sharp the sacrifices become when you’re backed into a corner."

The next big thing will start out looking like a toy

Chris Dixon – The next big thing will start out looking like a toy:

"To distinguish toys that are disruptive from toys that will remain just toys, you need to look at products as processes. Obviously, products get better inasmuch as the designer adds features, but this is a relatively weak force. Much more powerful are external forces: microchips getting cheaper, bandwidth becoming ubiquitous, mobile devices getting smarter, etc. For a product to be disruptive it needs to be designed to ride these changes up the utility curve.

Social software is an interesting special case where the strongest forces of improvement are users’ actions."

"What I’m writing here is the single most important take-away from my Sun years, and it fits in a sentence: The community of developers whose work you see on the Web, who probably don’t know what ADO or UML or JPA even stand for, deploy better systems at less cost in less time at lower risk than we see in the Enterprise.

[…] The point is that that kind of thing simply cannot be built if you start with large formal specifications and fixed-price contracts and change-control procedures and so on. So if your enterprise wants the sort of outcomes we’re seeing on the Web (and a lot more should), you’re going to have to adopt some of the cultures and technologies that got them built."

"Bob notices uptime, how long seemingly minor change requests take to implement, consistency in the UI, crashes, revenue, and conversion rates. He will notice the symptoms of bad code, even if he does not have the knowledge to diagnose the root cause, or the vocabulary to request the cure.

[…] Extracting real, actionable requirements from Bob, setting realistic expectations, and either meeting those original expectations or keeping the project on track as things change is a big part of success. Manage new information, new feature requests, and change requests while either coming in on time or resetting Bob’s expectations in advance."