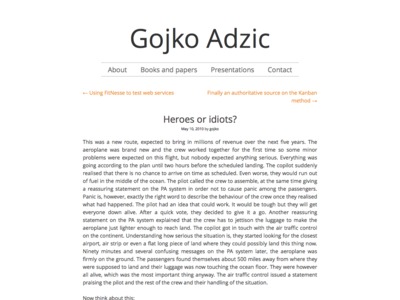 "Ninety minutes and several confusing messages on the PA system later, the aeroplane was firmly on the ground. The passengers found themselves about 500 miles away from where they were supposed to land and their luggage was now touching the ocean floor. They were however all alive, which was the most important thing anyway. The air traffic control issued a statement praising the pilot and the rest of the crew and their handling of the situation.

Now think about this: Were the pilot and the crew heroes – or were they a bunch of incompetent idiots? How does your answer change if the same thing happened again next week and the week after?"