"It all started at the end of March, 2009, when I discovered that I was listed as an author on a site called Ulitzer. They had used my name as a subdomain on their site […] and the site presented a photo of me, stating that I had been an author with them for several years. They had also scraped my blog posts and were reproducing them on the site under a different license to the one that I had published them under.

Beyond simply using my content without permission, they had misappropriated my identity by stating that I was one of their authors. And I wasn't the only one."

If You Want to Write Useful Software, You Have to Do Tech Support

Nick Bradbury – If You Want to Write Useful Software, You Have to Do Tech Support:

"If you really want to write useful software, stop spending all your time keeping up with technology.  Don't worry if your resume isn't filled with the latest buzzwords.  Instead, invest your time in talking with your customers. They don't care what programming language you use - they only care whether your software meets their needs, and the best way to ensure that is by breaking out of your cone of silence and opening the lines of communication." 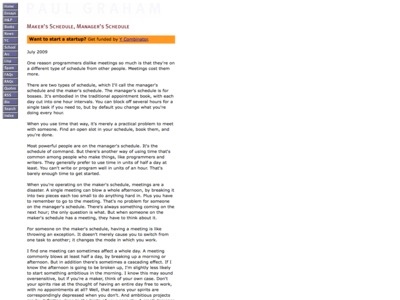 "I find one meeting can sometimes affect a whole day. A meeting commonly blows at least half a day, by breaking up a morning or afternoon. But in addition there's sometimes a cascading effect. If I know the afternoon is going to be broken up, I'm slightly less likely to start something ambitious in the morning. I know this may sound oversensitive, but if you're a maker, think of your own case. Don't your spirits rise at the thought of having an entire day free to work, with no appointments at all? Well, that means your spirits are correspondingly depressed when you don't. And ambitious projects are by definition close to the limits of your capacity. A small decrease in morale is enough to kill them off."

"The common wisdom is that marking things with tags or labels (so you can later search for them by tag) is better than organizing them hierarchically into folders.

[…] The problem is that people don't seem to "get" labels or grasp what the inherent advantage is in not organizing things into folders. They WANT folders.

[…] Labels are much more flexible for organization and searching. It's a pity Google felt they needed to take a step backwards by saying "yeah, OK, these can be like folders, too, whatever." This is a failure resulting not from the feature's original design but from Google's inability to promote it and educate users about it."

Shut up! Announcing your plans makes you less motivated to accomplish them.

Derek Sivers – Shut up! Announcing your plans makes you less motivated to accomplish them.:

"Four different tests of 63 people found that those who kept their intentions private were more likely to achieve them than those who made them public and were acknowledged by others.

Once you’ve told people of your intentions, it gives you a “premature sense of completeness.”"