"The dominant team members will get their way over the objections of the meek, no matter how competent the meek might be.

[…] All meetings last longer than they should."

"The Net has had a twofold effect on short-form publishing: First, it’s cheap, verging on free. Second, it enjoys many routes to potentially large audiences. It’s the second that’s interesting. Until recently, you simply couldn’t find a large audience for your thoughts unless you had books on shelves in stores, and books had to be a couple of hundred pages long (usually more) to get on shelves in stores. This resulted, among other things, in many unnecessarily thick books."

Getting insight into one’s own email

David Ascher – Getting insight into one’s own email:

"The “start page”, which makes a lot of sense in Firefox, never made a huge amount of sense to me in Thunderbird. In particular, it’s shown only when a folder is selected, and no message is selected. That’s hardly a logical time to show the (colorful, pretty, but fairly useless) page we show now. Instead, why not show information about the selected folder, and help people who clearly intended to select a folder, so most likely wanted to do something related to that folder!"

Fear is the mind-killer

Eric Ries – Fear is the mind-killer:

"When a new engineer started at IMVU, I had a simple rule: they had to ship code to production on their first day. […] For some, this was an absolutely terrifying experience. "What if I take the site down?!" was a common refrain. I tried to make sure we always gave the same answer: "if you manage to take the site down, that's our fault for making it too easy. Either way, we'll learn something interesting." 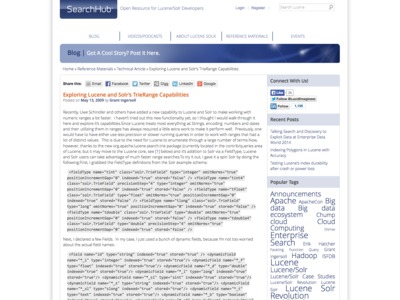 "Now, however, thanks to the new org.apache.lucene.search.trie package (currently located in the contrib/queries area of Lucene, but it may move to the Lucene core, see below) and it’s addition to Solr via a FieldType, Lucene and Solr users can take advantage of much faster range searches." 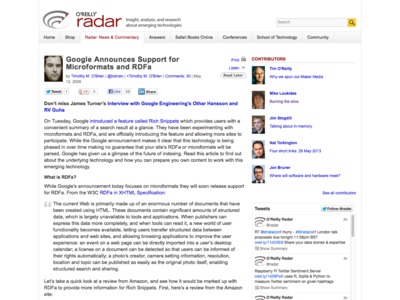 "On Tuesday, Google introduced a feature called Rich Snippets which provides users with a convenient summary of a search result at a glance. They have been experimenting with microformats and RDFa, and are officially introducing the feature and allowing more sites to participate. While the Google announcement makes it clear that this technology is being phased in over time making no guarantee that your site's RDFa or microformats will be parsed, Google has given us a glimpse of the future of indexing."

"As a whole, the application does a better job replicating the "newspaper" experience than reading in the browser.  […] Clean design and great execution make this a stellar user experience, and something other companies should strive to emulate. Even more impressive, I've had this application running on my machine all morning and haven't noticed any of the performance problems people complain about with Adobe AIR. "

Can the Noosphere Save Us?

Jon Udell – Can the Noosphere Save Us?:

"We are all continually discovering useful knowledge that we want to share. Until very recently, it was costly to transmit that knowledge beyond the local sphere: friends, family, tribe. Now, suddenly, it's free to address the whole world. The only cost is your time. Of course that is the scarcest commodity. But you already invest your time in the crafting of messages that you deliver only to the few. When appropriate, consider placing those messages in online venues where they can also inform the many."

Simon St. Laurent – Dreaming of Rails as the Next Microsoft Access:

"The general practice set by Access's creators from the beginning was to do as much as possible through visual interfaces rather than through code. In that, perhaps more than anything else, they struck a balance that made Access approachable while still letting it be powerful.

Rails culture runs the other direction. GUIs are the end product, but the code is pretty much all plain text. There are some tools for creating Rails forms out there, but an amazing number of developers work through text editors.

[…] Those barriers leave me stuck dreaming. I'm now as comfortable working in Rails as I ever was in Access, but there aren't a lot of direct paths from here to there. I'd love to see someone write an interface for Rails interface development that feels like Access, but there's no question it would be a difficult challenge."