Tim Bray on the Future of the Web 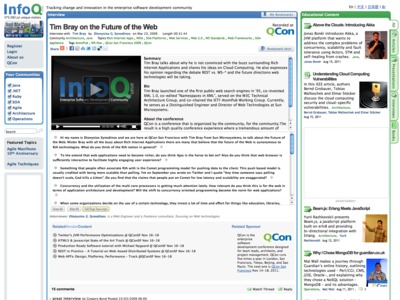 InfoQ interview – Tim Bray on the Future of the Web:

"When the web came along people shriked with glee and universally abandoned all those rich immersive responsive pre-internet applications and ran into the arms of the web.

[…] Over the years since then I have regularly and steadily heard them saying: "We need something that is more immersive, more responsive, more interactive". Every time without exception that somebody said that to me, they have either been a developer or a vendor who wants to sell the technology that is immersive or responsive, or something like that.

[…] On the other hand richness is a good thing but I would rather take an old fashioned point of view and if you look at the world's most popular actual real Internet applications you'll see things like Google and Facebook and Wikipedia, and so on kind of which I play all day web applications, and they are rich all right, they are rich because they expose you to lots of deep high quality content and allow you to communicate with interesting people and I think a dollar with that kind of richness is worth a thousand dollars of things that wiggle when you put the mouse over them So I tend to be highly cynical about this whole subject.

"Mega drop-downs make it easy to use icons and pictures when appropriate. And, even if you stick to text alone, you have richer typography at your disposal (letting you differentiate link sizes according to their importance, for example)."

Why Zappos Pays New Employees to Quit--And You Should Too

Bill Taylor – Why Zappos Pays New Employees to Quit--And You Should Too:

"The fast-growing company, which works hard to recruit people to join, says to its newest employees: "If you quit today, we will pay you for the amount of time you've worked, plus we will offer you a $1,000 bonus." Zappos actually bribes its new employees to quit!

Why? Because if you're willing to take the company up on The Offer, you obviously don't have the sense of commitment they are looking for. It's hard to describe the level of energy in the Zappos culture--which means, by definition, it's not for everybody. Zappos wants to learn if there's a bad fit between what makes the organization tick and what makes individual employees tick--and it's willing to pay to learn sooner rather than later."

"One of the exhilarating things about coming back to Cambridge every spring is walking through the streets at dusk, when you can see into the houses. When you walk through Palo Alto in the evening, you see nothing but the blue glow of TVs. In Cambridge you see shelves full of promising-looking books.

[…] How many times have you read about startup founders who continued to live inexpensively as their companies took off? Who continued to dress in jeans and t-shirts, to drive the old car they had in grad school, and so on? If you did that in New York, people would treat you like shit. If you walk into a fancy restaurant in San Francisco wearing a jeans and a t-shirt, they're nice to you; who knows who you might be? Not in New York.

One sign of a city's potential as a technology center is the number of restaurants that still require jackets for men. "

"Only if you see defunct "zombie" Oracle server processes then start PHP/Apache with the Oracle Net option BEQUEATH_DETACH=YES in your sqlnet.ora, or, to keep the setting specific to PHP, set your environment starting Apache.

[…] You should never need to configure PHP with --enable-sigchild or set BEQUEATH_DETACH=YES if PHP is "remote" from the DB server."

"Whenever we lie to kids to protect them, we're usually also lying to keep the peace.

One consequence of this sort of calming lie is that we grow up thinking horrible things are normal. It's hard for us to feel a sense of urgency as adults over something we've literally been trained not to worry about. When I was about 10 I saw a documentary on pollution that put me into a panic. It seemed the planet was being irretrievably ruined. I went to my mother afterward to ask if this was so. I don't remember what she said, but she made me feel better, so I stopped worrying about it.

That was probably the best way to handle a frightened 10 year old. But we should understand the price. This sort of lie is one of the main reasons bad things persist: we're all trained to ignore them."

How to be a program manager 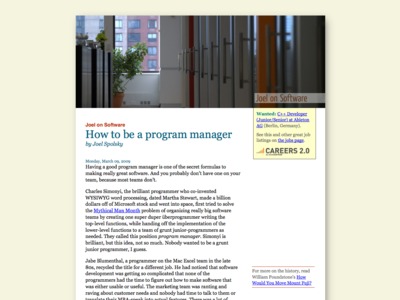 Joel Spolsky – How to be a program manager:

"The number one mistake most companies make is having the manager of the programmers writing the specs and designing the product. This is a mistake because the design does not get a fair trial, and is not born out of conflict and debate, so it’s not as good as it could be."

Newspapers and Thinking the Unthinkable

"It makes increasingly less sense even to talk about a publishing industry, because the core problem publishing solves — the incredible difficulty, complexity, and expense of making something available to the public — has stopped being a problem.

[…] The competition-deflecting effects of printing cost got destroyed by the internet, where everyone pays for the infrastructure, and then everyone gets to use it. And when Wal-Mart, and the local Maytag dealer, and the law firm hiring a secretary, and that kid down the block selling his bike, were all able to use that infrastructure to get out of their old relationship with the publisher, they did. They’d never really signed up to fund the Baghdad bureau anyway.

"Everything is request-oriented, short-lived, and stateless. A PHP script is like an object itself, encapsulating a bit of functionality behind an interface defined by HTTP. It's one of the most effective paradigms for software devlopment in history. The platforms that win on the web are those that mirror its fundamental structure, not those that try to morph it into a more traditional "elegant" shape.

[…] For them, PHP is an ideal language precisely because it gets out of their way, allowing them to build a simple foundation for their complex and beautiful browser-based cathedrals."

Extracts from the book The UNIX Philosophy by Mike Gancarz – The Three Systems of Man:

"The third system appears after people become disenchanted with their second system. The Third System is:

The third system combines the best characteristics of the first and second systems. Its developers are given the time to properly develop the system."

"The TV networks already seem, grudgingly, to see where things are going, and have responded by putting their stuff, grudgingly, online. But they're still dragging their heels. They still seem to wish people would watch shows on TV instead, just as newspapers that put their stories online still seem to wish people would wait till the next morning and read them printed on paper. They should both just face the fact that the Internet is the primary medium."