"Rule 2: I want to easily migrate the service from my infrastructure to a cloud provider and vice versa with a few clicks of a button."

"With software as a service, the focus has become whether the tool is good enough on day one and how well it will adapt over time.

[…] How effectively can your users accomplish their goals? How many cases-per-minute or entries-per-day can workers do, and how many errors do they make?" 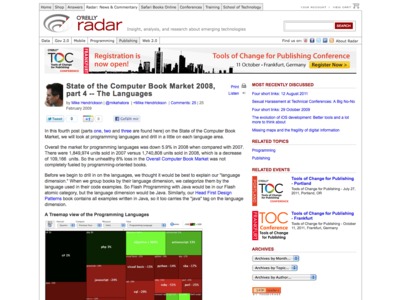 "If you look at the five-year trend for the languages shown below, you can see that C# has been steadily growing year after year while Java has been going in the opposite direction during the same period. PHP, ActionScript and Python are the other languages going in a positive direction. Ruby, Java, and C++ had the biggest declines in unit sales during 2008, and Ruby dropped out of the top 10 languages."

"Pixel Bender is an exciting new technology by Adobe which brings video and image processing capabilities to the flash runtime. It allows you to create and apply filters to ‘bend’ pixels and create compelling animations which have never been possible in an HTML environment. Because Adobe AIR uses flash to load any HTML content, we can leverage these powerful filters on a standard Ext Application in the AIR environment."

How Entity Extraction is Fueling the Semantic Web Fire

"I have been very impressed at the scope and depth of some of the new OpenSource entity extraction tools as well as the robustness of commercial products. I thought I would discuss this since these technologies could start to move the semantic web (Web 3.0) up the hockey stick growth curve."

"It turns out that organizations get better at those things that they do very often. So when we start checking in code more often, release more often, or conduct more frequent design reviews, we can actually do a lot to make those steps dramatically more efficient."

"If you are planning to create some business or other form of entertainment, you will need quality at some point to succeed. But what is more important than quality in the beginning is some intangible element that makes your project inherently interesting before anyone has even sampled it. That initial audience will give you the luxury of time to create quality.

I have a twofold test for whether something can obtain instant popularity and thus have time to achieve quality:

1. You must be able to describe it in a few words.

2. When people hear about it, they ask questions."

"One of the reasons why I like to go out on the floor to China is I like to make sure that all the people that we work with are treated well and humanely, right? So I actually stay in the factory dorms and eat the factory food. So they can't -- I mean there's things that guys can do still in China to sort of fool me. Like they have a special day when they know I'm coming to the floor and they'll give them extra special food or something. That's happened before."

The myth of the concentration oasis

Vaughan at Mind Hacks – The myth of the concentration oasis:

"The past, and for most people on the planet, the present, have never been an oasis of mental calm and creativity. And anyone who thinks they have it hard because people keep emailing them should trying bringing up a room of kids with nothing but two pairs of hands and a cooking pot."

Going rogue inside a big company (a la Best Buy)

Matt Linderman at Signal vs. Noise – Going rogue inside a big company (a la Best Buy):

"Pick something and do it under the radar. Create something in a few weeks that normally takes a few months.

[…] Amazing what a difference a couple of rogue employees can make. If these guys can do it at a company as big as Best Buy, what can you get done at your workplace?"

[…] What if you have multiple licenses for the same asset used different ways? This is getting complex isn’t. A highly DAM customization could do this for your organization."

"Much of the advertising for the HP Oracle Database Machine is about performance speedup. In real workload tests, many of Oracle's customers are seeing far more than ten times performance improvement.

[…] Essentially, buyers of the platform need to choose what to name the database and SID, what national character set is used, and whether the database is set up using ARCHIVELOG or NOARCHIVELOG. Other database settings, including common initialization parameters, tablespace layout, and sizes of standard components […] are pre-set based on Oracle best practices."

"Anything else people make can be well or badly designed; why should this be uniquely impossible for programming languages? And indeed, you can have a fruitful discussion about the relative merits of programming languages, so long as you exclude people who respond from identity.

[…] The most intriguing thing about this theory, if it's right, is that it explains not merely which kinds of discussions to avoid, but how to have better ideas. If people can't think clearly about anything that has become part of their identity, then all other things being equal, the best plan is to let as few things into your identity as possible."

"Because the for-profit sector has few truly long-term interests, on the timescale of the unfolding disaster. ("Human survival is a bonus, but that's twenty years out. What about next quarter's report?")

Further, the scale and scope of the impending collapse will require a special spirit of voluntarism and shared labor and sacrifice, something that's painfully hard to monetize.

[…] My friend and I made a decision, almost two years ago, to use most of our extra evenings to work on the many incarnations of the project, instead of watching reruns of The Daily Show or Lost. The project, especially as it evolved, was much more satisfying than being hypnotized."

The case against Flex-based application UIs

"Flex applications are prone to the same memory leaks and CPU spikes that bedeviled applets for years. To be sure, I've seen some fat and ugly JavaScript-based interfaces too, but at least everyone can debug those openly."