The Best and the Worst Tech of the Decade

James Turner at O'Reilly Radar – The Best and the Worst Tech of the Decade:

"SOAP was a particularly egregious failure, because it was sold so heavily as the final solution to the interoperatibility problem. The catch, of course, was that no two vendors implemented the stack quite the same way, with the result that getting a .NET SOAP client to talk to a Java server could be a nightmare. […] And the WSDL files that define SOAP endpoints are unreadable and impossible to generate by hand."

What is Lean about the Lean Startup?

Kent Beck at Lessons Learned – What is Lean about the Lean Startup?:

Why I gave away my company to charity

Derek Sivers – Why I gave away my company to charity:

"I get the deeper happiness of knowing the lucky streak I've had in my life will benefit tons of people - not just me.

I get the pride of knowing I did something irreversibly smart before I could change my mind."

"But a few devastating times, I found out that I had tried too hard not to micro-manage. I hadn’t managed at all. I had said something once, thought it was understood and agreed, and assumed the best.

[…] In all of the cases, a simple one-minute verification along the way would have prevented everything."

When and How to Micromanage 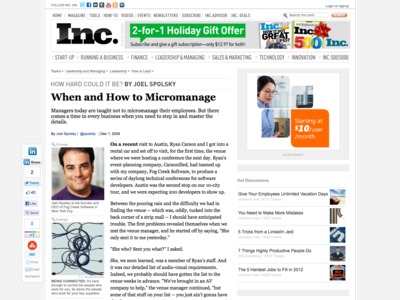 Joel Spolsky at Inc. – When and How to Micromanage:

"I care. Ryan cares. Our staffs care. The venue manager might care but doesn't know enough. The AV people he hired? Sometimes, they officially Don't Care, Don't Know How to Do Their Job, and Really Just Want to Go on Break. And the minute you cross that line, from the people who care to the people who want to go home, that's when you have to micromanage. You have to check in on people and inspect their work and sign contracts in blood demanding that if the Wi-Fi isn't perfect, it'll be free."