"I would submit that my experiences underscore a hard truth in the age of iPhone; namely, that successful device vendors can no longer deliver piecemeal offerings that 'mostly work.' Rather, they have to deliver complete product solutions that work consistently as expected."


That's all. (As an Adobe partner, our company also has licenses for developing and testing against the Adobe Creative Suite but that's not what I use to get my work done.)

It's great that developing software (at least the web-based kind we're doing) requires almost no investments these days, aside from hardware and an Internet connection! I remember very well how frustrated I was (as a pupil and student) for not being able to program because serious money was being charged for IDEs and compilers…

Solr heads for an even sunnier future 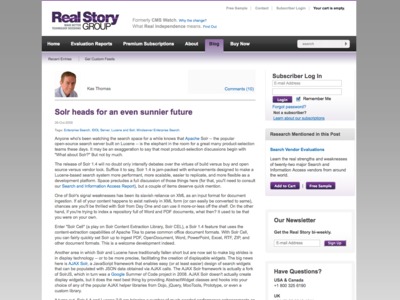 Kas Thomas at CMS Watch – Solr heads for an even sunnier future:

"Anyone who's been watching the search space for a while knows that Apache Solr -- the popular open-source search server built on Lucene -- is the elephant in the room for a great many product-selection teams these days. It may be an exaggeration to say that most product-selection discussions begin with "What about Solr?" But not by much.

The release of Solr 1.4 will no doubt only intensify debates over the virtues of build versus buy and open source versus vendor lock." 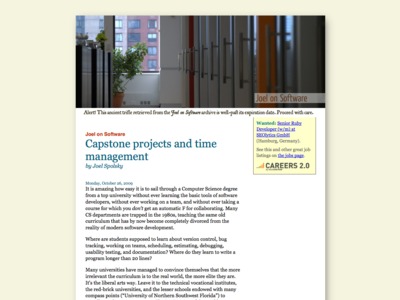 "College students in their final year have about 16 years of experience doing short projects and leaving everything until the last minute.

[…] This might be a neat opportunity to use Scrum.

[…] I’ve been blaming students, here, for lacking the discipline to do term-length projects throughout the term, instead of procrastinating, but of course, the problem is endemic among non-students as well. It’s taken me a while, but I finally learned that long-term deadlines (or no deadlines at all) just don’t work with professional programmers, either: you need a schedule of regular, frequent deliverables to be productive over the long term."

A real Customer Advisory Board

"In a previous company, we put together a group of passionate early adopters. […] Every two months, the company would have a big end-of-milestone meeting, with our Board of Directors, Business Advisory Board, and all employees present. At this meeting, we’d present a big package of our progress over the course of the cycle. And at each meeting, we’d also include an unedited, uncensored report direct from the Customer Advisory Board.

[…] It’s a lot harder to claim everything is going smoothly, and that customers are dying for Random New Feature X when the report clearly articulates another point of view. Sometimes the right thing to do is to ignore the report. After all, listening to customers is not intrinsically good. As always, the key is to synthesize the customer feedback with the company’s unique vision. But that’s often used as an excuse to ignore customers outright. I know I was guilty of this many times. It’s all-too-easy to convince yourself that customers will want whatever your latest brainstorm is. And it’s so much more pleasant to just go build it, foist it on the community, and cross your fingers. It sure beats confronting reality, right?"

"Interfaces need a comfortable lived in feel. Content management is something people work with every day, it is their interface to their job. You meet people who hate the interface, and that makes their work a heap of pain. I have seen people who describe the 44 clicks it takes to insert an image. You have a responsibility to these people, to make them love the content and make the tool disappear.

[…] “Power users” (those who use it all day long) of CMSs needed to have a “Desktop” experience. What does Desktop Experience mean? Well, it doesn’t really have to be on the desktop – these days it is perfectly possible to get very close to a hitherto Desktop experience in a browser or similar. these are qualities: very low latency from action to response, no page refreshes, modal and modal-less dialog boxes as appropriate, “push” notification."

Thoughts on the Whitehouse.gov switch to Drupal 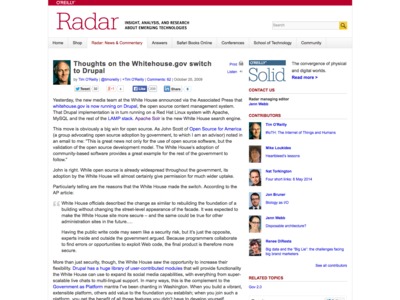 Tim O'Reilly at O'Reilly Radar – Thoughts on the Whitehouse.gov switch to Drupal:

"Yesterday, the new media team at the White House announced via the Associated Press that whitehouse.gov is now running on Drupal, the open source content management system. That Drupal implementation is in turn running on a Red Hat Linux system with Apache, MySQL and the rest of the LAMP stack. Apache Solr is the new White House search engine."

"Now, to my delight, Apple has tackled the last remaining frontier of predicate editors- the nested clause. My design partner, Jessica, found this when trying to pull together a playlist for her birthday last week. She needed something more complex than a simple AND or OR (which Apple eloquently rephrased as “matching all of these conditions” or “matching any of these conditions”)."

"I see PubSubHubbub, as much as anything, as an attempt to capture Twitter’s pattern of information flow in a reproducible, interoperable way.

[…] Hooking up a publishing system to the PubSubHubbub machinery is damn easy; I know because I just did it. You have to put <link> element(s) in your Atom feed pointing at one or more hubs that will be aggregating you. Then, when you update your site, you need to ping the hub(s) using HTTP POST."

"Dialogs are annoying, in general, because there's usually very little actual "dialog" happening in a dialog box; it's more of a monolog. It's the programmer who wrote the software telling you what to do next, rather than the reverse."

"Agile software teams deliver value in the form of releasable software at frequent regular intervals (at least monthly), at a sustainable pace, while adapting to the changing needs of the business. […] Bottom line is delivering releasable software at least monthly. Releasable in this case means that we actually know that it is going what we wanted it to do. Delivering frequently is not let’s ship it and see what happens. It’s not releasable until it’s Done. Done means both implemented and tested."

Mechanical Turk app on the iPhone Provides Work for Refugees

"The turks in the refugee camps are recent graduates of Samasource's computer training program. Rather than sitting idly while they wait to be employed, they earn money performing simple computer tasks for real companies. On the other hand, Give Work app users volunteer to perform simple tasks on their iPhone knowing that refugees in Africa are benefiting. CrowdFlower founder Lukas Biewald notes that their work with Samasource opens up their platform to companies who want to tap into and help micro-workers in developing countries."

"File promises is a new API (URLFilePromise) that allows you to access resources at a certain URL and drag them out of the AIR application as a file promise into the local machine. Once the files are dropped the request will be made to download the file to your local machine.

[…] Adobe AIR 2.0 uses the same branch of WebKit as Safari 4 beta […]. The most significant feature of using this branch of WebKit is the usages of SquirrelFish Extreme (SFX), which has been integrated into the WebKit engine and increases the overall performance of Webkit. " 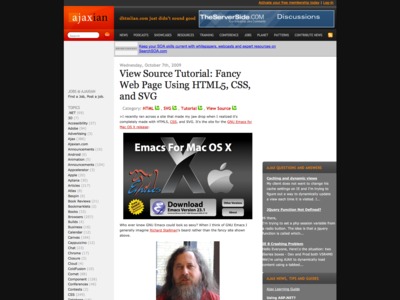 "I love this example because it shows a few things. First, that SVG is definitely not dead; this works on every browser but IE -- that doesn't sound like a dead technology to me. Second, this example is much better done with SVG than the Canvas tag."

"We all collectively waste massive amounts of human and commercial capital by building too much software. The sheer amount of wastefully duplicated effort endemic to the ICT industry is staggering.

"About a year ago, we launched the Times Article Search API and the TimesTags API, two systems that allow developers to search our extensive collection of articles and to identify the canonical terms we use to describe them. Together, these APIs provide developers with the means to accurately find articles that are relevant to nearly any subject.

But there’s a problem with these (and most) APIs: they’re inherently narrow in their reach. The methods for using them are indecipherable for the average (non-developer) Times reader, and the data returned are formatted in a way that’s specific to each API, limiting their use across the Web. Enter the solution: custom RSS feeds."

Sounds to me like they should have based their Search API on OpenSearch: they would have gotten custom feeds for free…

"At MAX this week we’re showing a preview of AIR 2.0, codenamed Athena. We’ve added tons of cool new features, but first, we’ve worked on reducing the memory and CPU usage for a lot of AIR applications. We’ve also listened to what our developers were asking for and we’re adding some of the most popular features:

The new rules of news

Dan Gillmor at guardian.co.uk – The new rules of news:

"Transparency would be a core element of our journalism. One example of many: every print article would have an accompanying box called "Things We Don't Know," a list of questions our journalists couldn't answer in their reporting. TV and radio stories would mention the key unknowns. Whatever the medium, the organisation's website would include an invitation to the audience to help fill in the holes, which exist in every story." 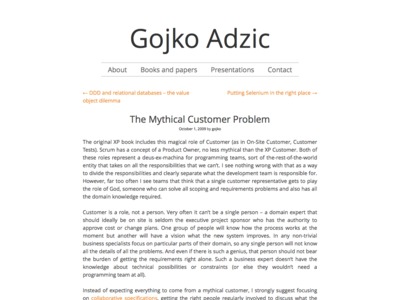 "Customer is a role, not a person. Very often it can’t be a single person – a domain expert that should ideally be on site is seldom the executive project sponsor who has the authority to approve cost or change plans. One group of people will know how the process works at the moment but another will have a vision what the new system improves. In any non-trivial business specialists focus on particular parts of their domain, so any single person will not know all the details of all the problems."