The bullshit of outage language

David Heinemeier Hansson at Signal vs. Noise – The bullshit of outage language:

"Also, you should find someone willing to take personal responsibility. Even if it’s not directly their fault. There’s always someone who’s in charge, someone who stops the buck. Hiding behind a faceless “we” is weak."

"What's more important? Getting flash after 5 seconds, or functional no-frills layouts in less than a second? Let's get our priorities straight. Speed still matters. And remember, the perception of speed is just as important as actual speed. If you can't be fast, be clever." 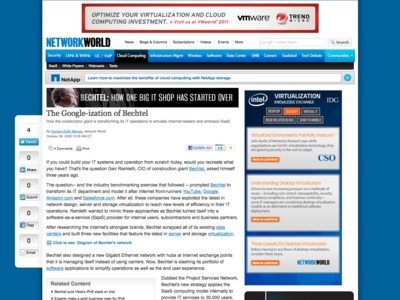 Network World – The Google-ization of Bechtel:

"Dubbed the Project Services Network, Bechtel's new strategy applies the SaaS computing model internally to provide IT services to 30,000 users, including 20,000 employees and eventually 10,000 subcontractors and other business partners.

We operate "as a service provider to a set of customers that are our own [construction] projects," Ramleth said. "Until we can find business applications and SaaS models for our industry, we will have to do it ourselves, but we would like to operate with the same thinking and operating models as [SaaS providers] do."

[…] Bechtel turned to Salesforce.com for its expertise in running a single application with millions of users. In contrast, Bechtel operates 230 applications, and it runs 3.5 versions per application, which means it maintains approximately 800 applications at any given time.

"When you look at Salesforce.com, not only are they running one application, but they are running one version and they are only running it in one location," Ramleth says. "They upgrade that application four times per year, and they don't disrupt the users by having to retain them. Every time we have a new version, we have to retrain our users."" 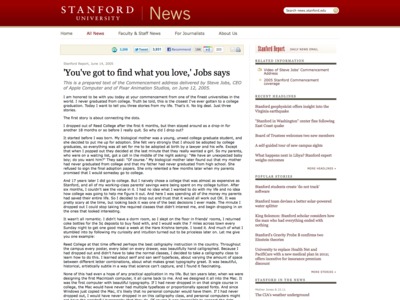 The June 12, 2005 Commencement address by Steve Jobs at Stanford University:

"For the past 33 years, I have looked in the mirror every morning and asked myself: "If today were the last day of my life, would I want to do what I am about to do today?" And whenever the answer has been "No" for too many days in a row, I know I need to change something.

Remembering that I'll be dead soon is the most important tool I've ever encountered to help me make the big choices in life. Because almost everything — all external expectations, all pride, all fear of embarrassment or failure - these things just fall away in the face of death, leaving only what is truly important. Remembering that you are going to die is the best way I know to avoid the trap of thinking you have something to lose."

"If you went anywhere this weekend, you probably found yourself in conversations about this pilot and this event. And the thing you probably talked about was his outrageous level of competence. You might have gotten chills when you heard about it. Maybe you teared up. At the very least it impressed the hell out of you. But something more fundamental happened too. This one pilot changed all of us. He reminded us what competence means and he proved in spectacular fashion that it still exists."

"The difference between the novice and the master is simply that the novice has not learnt, yet, how to do things in such a way that he can afford to make small mistakes. The master knows that the sequence of his actions will always allow him to cover his mistakes a little further down the line. It is this simple but essential knowledge which gives the work of a master carpenter its wonderful, smooth, relaxed, and almost unconcerned simplicity."

What are Your Force Multipliers in Software Development?

chromatic at O'Reilly Broadcast – What are Your Force Multipliers in Software Development?:

"I can't imagine a world without diff and patch. On the occasion when I need to massage a patch by hand, I recognize how fortunate we are to be able to identify only the differences between systems."

Hard Work and Practice in Programming

"There's a long arc in computing that teaches us how much we gain through advances in ease-of-use, with the iPhone being the latest breakthrough success. But it's important to remember how much we lose when we think that ease of use is everything. Many things worth doing are hard, requiring a great deal of practice before you achieve mastery.

[…] The interview with Stroustrup provoked a great discussion on the O'Reilly editors' backchannel. It was so juicy that I wanted to share it with all of you."

Matt Linderman at Signal vs. Noise – "You have to treat your employees like customers":

"Over the years, whenever reporters would ask him the secret to Southwest’s success, Mr. Kelleher had a stock response. “You have to treat your employees like customers,” he told Fortune in 2001. “When you treat them right, then they will treat your outside customers right. That has been a powerful competitive weapon for us.”"

The tale of two bridges 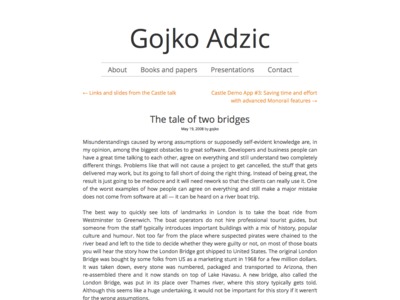 "Understanding why something is required, instead of just blindly following the tasks, is definitely one of the key practices to improve the chances of success in a software project. In my article The magic of goals, I suggested that whenever a client comes with a list of tasks, we should instead ask them for the problems that they are trying to solve and their business goals."

"It seems to me, in fact, from the historical record, that the idea of literary reading as a sort of broad and normal activity was done in by television, and it was done in forty years ago.

The funny thing, though, is when television came along, it became, to a degree literally unprecedented in the history of media—not just the dominant media compared to other media, but really the dominant activity in life outside of sleeping and working—that a curious bargain was struck where television still genuflected to the idea of literary reading. The notion was that there was somehow this sacred cathedral of the great books and so forth. It was just that no one actually participated in it, and so it was sort of this kind of Potemkin village. What the Internet has actually done is not decimate literary reading; that was really a done deal by 1970. What it has done, instead, is brought back reading and writing as a normal activity for a huge group of people."

"So who are the main players in Enterprise Search?"

"We are, right now in early 2009, sliding into the golden age of mobile technology and business.

[…] What’s crucial is that there will be at least four players—all with healthy finances and real engineering depth—vying to build devices to improve your life. Which is wonderful! This kind of competition on a wide-open playing field is what makes evolution and growth happen.

[…] The iPhone has proved that a mobile device can really truly be a first-class citizen of the Net. Which had been true in theory for a decade; but only in theory. Speaking personally, as a person who’d never thought I needed the Internet in my pocket, I find myself using my G1 to approve comments and check the weather and fetch maps and so on all the time." 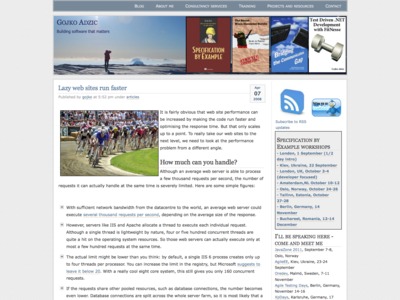 "Clever choice of asynchronous processing is definitely one of the most important decisions in any enterprise system. This is especially true for Web sites, where it absolutely plays a key role. Here are a few ideas to think about when deciding how to split the work."

Also by Gojko Adzic – Messaging is not just for investment banks:

"A messaging solution might help to divide and conquer, isolating parts of the system so that they don’t really care about each other. It also makes the system easier to scale and extend. The agents can just publish requests to a message queue, not caring about who and where will actually process them. A number of different processes, running on different machines, can pick up requests and service them, pushing the results back to the message queue. The results might be delivered back to the original requester or picked up by another worker to continue or complete the job."

"I wasn’t very pleased with the typography of the generated content—though obviously the aesthetics were customizable through CSS, none of the default stylesheets left me dying to read the documentation I created.

I’ve always had these kinds of hangups when it comes to design; a lack of it repels me from some software that might otherwise be interesting or useful, while good aesthetics is part of the reason I’m drawn to a handful of projects like TeX that are truly elegant out-of-the-box. With this in mind, I decided to play around with creating my own simple code documentation system."

PHP still serves us great, it's very stable and usually painless to work with. But this week I've spent some quality time with PHP 5.3 (alpha4-dev) since our long-running PHP command line scripts were (still) leaking memory…

"Mapeed.AddressChooser is a Javascript script to create a nice address form for any websites that need to collect addresses. […] Interactive map display location while you are typing an address."

Ryan Singer at Signal vs. Noise – iPhoto '09 and Domain Language:

"There is a strong tendency to use the same words that you see other software using. Be cautious about copying domain language, because copying language is copying a whole approach. Think through the domain yourself. What are people trying to do? What do they care about? Find your own language to cut closer to the bone and touch your customers’ real interests. Your software will be all the better for it."

Future of your Phone

Scott Adams – Future of your Phone:

"Imagine wondering how long the line is to an event, or what a particular forest fire looks like, for example.  You send a query through your iPhone for anyone who is in that area, according to GPS tracking, and ask for a look. A kind stranger takes your query, sets his phone to stream video, and gives you the view from his perspective. You would have eyes anywhere there are people. "

Hardware is Cheap, Programmers are Expensive

"Incidentally, this is also why failing to outfit your (relatively) highly paid programmers with decent equipment as per the Programmer's Bill of Rights is such a colossal mistake. If a one-time investment of $4,000 on each programmer makes them merely 5% more productive, you'll break even after the first year.

[…] Always try to spend your way out of a performance problem first by throwing faster hardware at it. It'll often be a quicker and cheaper way to resolve immediate performance issues than attempting to code your way out of it. Longer term, of course, you'll do both." 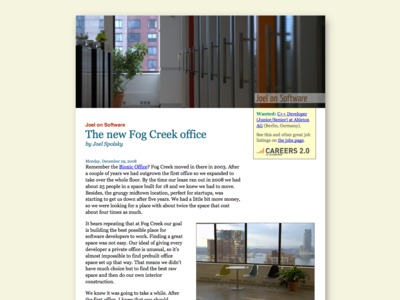 "Private offices with doors that close prevent programmers from interruptions allowing them to concentrate on code without being forced to stop and listen to every interesting conversation in the room.

[…] Long, straight desks include a motorized height-adjustable work surface for maximal ergonomics and comfort, and so you can stand up for part of the day if you want. Standard 30” monitors. Desks are straight instead of L-shaped to make pair programming and code reviews more comfortable. There are 20 electrical outlets behind every desk and most developers have small hubs for extra computers. Our standard-issue chair is the Herman Miller Aeron."

"At a deep level, debugging with print statements is superior to all other approaches. Which is good, because we seem to be stuck with it." 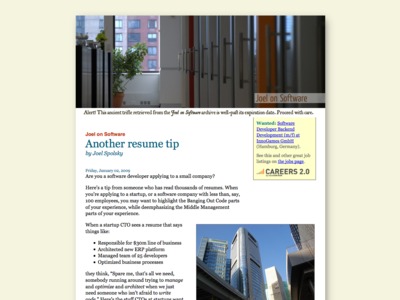 "To a startup founder, middle managers just seem like added expense without more code getting written, and the only thing we REALLY need is