Having fun with geotagged photos

"Today I am going to explain how to extract the geotagging information stored by Picasa and do some fun things with it in PHP." 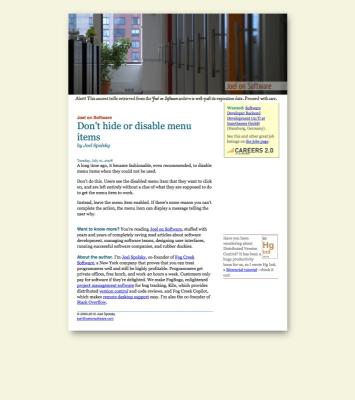 "Instead, leave the menu item enabled. If there's some reason you can't complete the action, the menu item can display a message telling the user why."

iPod touch Backward Lesson from Windows Mobile: The Value of a Phone-less Device

"The iPod touch with its new ability to download and install applications will, I believe, demonstrate that there is a segment of the market that wants a multimedia-PDA device that is connectable (via WiFi) but not always connected."

Build One To Throw Away

Tim Bray –Build One To Throw Away:

"Managers, good managers, want a plan; they want to lock in design constraints so that work can be dealt out and progress tracked and promises kept. Programmers, good programmers, know that they’re not smart enough to get the core design choices right until they’ve built something that works.

The various techniques and disciplines gathered around the banner of “agile” are on balance more honest at facing up to this unavoidable tension. But there’s still lots more work to be done.

And the most important thing is, we all have to remind ourselves, all the time, that we’re not smart enough to get anything important right the first time."

Todd Hoff at High Scalability – Latency is Everywhere and it Costs You Sales - How to Crush it:

"In one of Greg's slides Google VP Marissa Mayer, in reference to the Google results, is quoted as saying "Users really respond to speed." […] Yet for some reason latency isn't a topic talked a lot about for web apps. We talk a lot about about building high-capacity sites, but very little about how to build low-latency sites."

Firefox extension DragDropUpload (found here in the Firefox add-on directory): "Drop files into attachment boxes instead of browse for them or type in the filename. Drop multiple files and fill all the entries."

"The key point of [Sam] Hunting's experience, which emphasized letting users do what they wanted to do, valid or not valid, was that "People really do care about tagging - they really do tag - when they get an immediate positive result." The key phrase there is "immediate positive result." Hunting showed examples of the kinds of features that users could add easily if they were willing to take the time to add some Topic Maps markup to their documents."

The fifth element of the Agile Manifesto 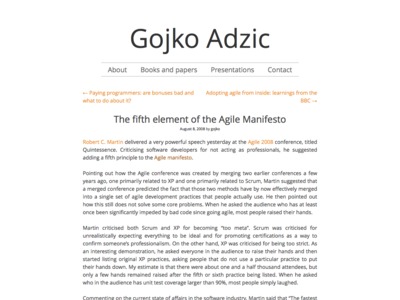 Gojko Adzic – The fifth element of the Agile Manifesto:

"Martin [Fowler] then talked about Ignaz Semmelweis, a hospital administrator in 19th century Vienna who discovered that the mortality rate in a maternity clinic could be drastically cut by making doctors wash their hands when moving between the autopsy ward and the maternity ward. Semmelweis met with stiff resistance, including the claim that doctors had no time to wash their hands, according to the talk.

[…] Drawing parallels between that story and software development, Martin asked programmers to “wash their hands” and write clean code, not giving in to time pressures or claiming that they have no time for that or that they will not be allowed to do that."

10 ways to screw up despite Scrum and XP 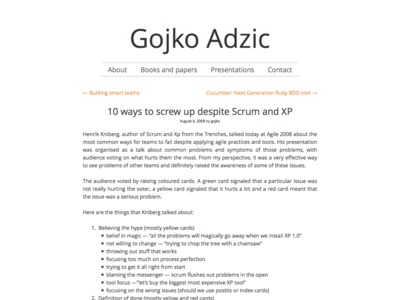 Gojko  Adzic – 10 ways to screw up despite Scrum and XP:

"Henrik Kniberg, author of Scrum and Xp from the Trenches, talked today at Agile 2008 about the most common ways for teams to fail despite applying agile practices and tools. His presentation was organised as a talk about common problems and symptoms of those problems, with audience voting on what hurts them the most." 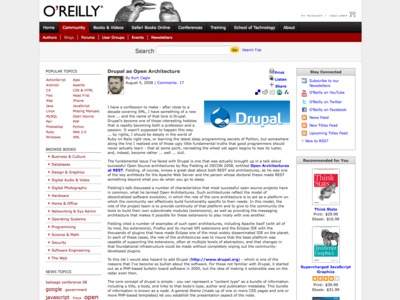 "One thing that's rubbed at me for a while is that Ruby on Rails is still based upon this paradigm that you have to write code in order to build a site, which means that Ruby will always be of use only to those people who can write Ruby code in the first place.

With Drupal, that's no longer a requirement, and it means that people can get Drupal sites up and running quickly without needing to understand the first thing about programming - and if they can't find a module that does what they need […] then they can find a programmer that will create just that functionality without having to rebuild the entire site. It's one of the reasons why Drupal is beginning to become the de facto environment for smaller news organizations and PR departments.

[…] As to Drupal, it has effectively become to web portals what Eclipse is to application development, and has the potential to significantly challenge Microsoft's Sharepoint or similar commercial portal applications in that space."

Todd Hoff at High Scalability – A Bunch of Great Strategies for Using Memcached and MySQL Better Together:

"What I'm struck with is the enormous amount of effort that goes into syncing rows and objects back and forth between the cache and the database. Shouldn't it be easier?" 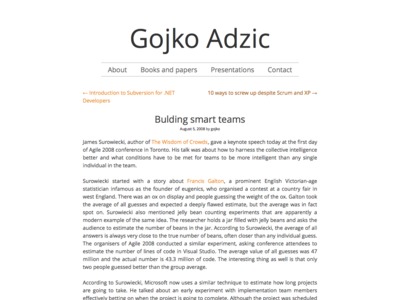 "Have people on the team that think differently, use different tools and approach the problems from a different angle. This will help the team spot blind spots easier and avoid the echo effect, increasing the team collective intelligence."