The Worthlessness of Code

James Turner at O'Reilly ONLamp - The Worthlessness of Code:

The problem is, most companies let the value walk out the door (either through layoffs or attrition), leaving them with “value” that the new engineers don’t understand, because the value is really the synergy of the code and the engineers who wrote it.

[…] We should treat code like a depreciated asset; the longer it sticks around, the less valuable it becomes. Eventually, it actually takes on negative value, because the potential security risks and support nightmares of bit rotted code can be huge. Embrace the freedom that acknowledging these facts bring, budget a periodic total rewrite into your business plans, and you’ll never end up with a piece of code that nobody has any idea what it does."

Java is losing the battle for the modern Web

Andi Gutmans - Java is losing the battle for the modern Web. Can the JVM save the vendors?:

"Project Zero’s Chief Architect is one of the first IBMers to admit in public that Java today can be considered as a system language and is not desirable for building RESTful Web applications which is Project Zero’s goal (slide #4 of the presentation- see slide #11 to see how a simple “Hello, World” in Java compares to dynamic languages like Groovy and PHP). It has taken over 10 years for the Java stronghold to admit Java’s poor ROI on the Web and with the current recession it is likely that many Java customers are going to be making more informed investments. As a result there will be considerable rise in uptake of dynamic languages."

You Weren't Meant to Have a Boss

Paul Graham - You Weren't Meant to Have a Boss:

"A group of 10 people within a large organization is a kind of fake tribe. The number of people you interact with is about right. But something is missing: individual initiative. Tribes of hunter-gatherers have more freedom. The leaders have a little more power than other members of the tribe, but they don't generally tell them what to do and when the way a boss can.

It's not your boss's fault. The real problem is that in the group above you in the hierarchy, your entire group is one virtual person. Your boss is just the way that constraint is imparted to you."

"In essence MapReduce works by repeatedly sorting and merging data that is streamed to and from disk at the transfer rate of the disk. Contrast this to accessing data from a relational database that operates at the seek rate of the disk."

(Via Nat Torkington at O'Reilly Radar.) 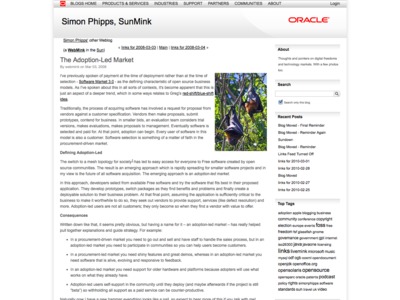 "Traditionally, the process of acquiring software has involved a request for proposal from vendors against a customer specification. Vendors then make proposals, submit prototypes, contend for business. In smaller bids, an evaluation team considers trial versions, makes evaluations, makes proposals to management. Eventually software is selected and paid for. At that point, adoption can begin. Every user of software in this model is also a customer. Software selection is something of a matter of faith in the procurement-driven market.

The switch to a mesh topology for society1 has led to easy access for everyone to Free software created by open source communities. The result is an emerging approach which is rapidly spreading for smaller software projects and in my view is the future of all software acquisition. The emerging approach is an adoption-led market.

In this approach, developers select from available Free software and try the software that fits best in their proposed application."

"If I were to visit a symphony orchestra and ask them about their growth plans for the future, how would they respond? They would talk about their plans to extend their repertoire and to bring their work to new audiences, not about increasing the number of violinists. The same holds true for a school or a hospital. Once they get to the appropriate size, they strive to be better not bigger.

Why should it be different for business? Why does almost every business that I know seek to grow in size, year after year, in fact, as if there were no limit?"

(Via Signal vs. Noise) 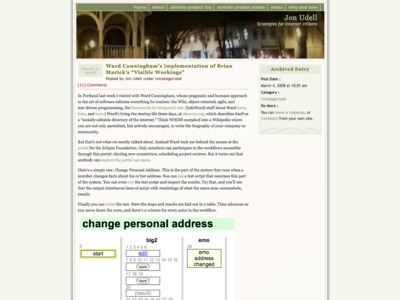 "This isn’t just an innovative approach to software testing and workflow visualization. It’s also a radical statement about business process transparency. For most of us, most of the time, business systems are black boxes whose internal workings we can only discern in the outcomes of our (often painful) interactions with them. But what if you could find out, before pressing the Save button, what’s going on in that black box? And what if your way of finding out wasn’t by reading bogus documentation, but instead by probing the system itself using its own test framework?"