Feeling the pulse with Queen Bee

"At the top of our Queen Bee admin screen we have a stream showing the latest activity across Basecamp, Backpack, Highrise, and Campfire.

[...] Everyone at 37signals has access to this stream of signups, upgrades, downgrades, and cancellations. It’s a great way to get a feel for patterns, how things are going in general, and where people are finding out about our products."

"Using the curl_multi* family of cURL functions you can make those requests simultaneously. This way your app is as slow as the slowest request, as opposed to the sum of all requests. And that's something."

"I downloaded the SamePlace Suite Firefox extension, which is a small suite of applications built on top of xmpp4moz. I fired it up and discovered that it contained a nice Jabber client written in XUL with explicit support for Google Talk. The only remaining question was: how did it work?"

I will Get That Nobel Peace Prize Yet!

Scott Adams at The Dilbert Blog - I will Get That Nobel Peace Prize Yet!:

"The $100 laptops we keep hearing about will eventually give Internet access to even small villages. Imagine having a pen pal in some tiny African village. You learn that all they need is one of those foot-operated water pumps for irrigating fields and a bag of seeds and they can build a decent life. For a few hundred dollars you could save an entire village and get to see the results in real time. Who could resist?" 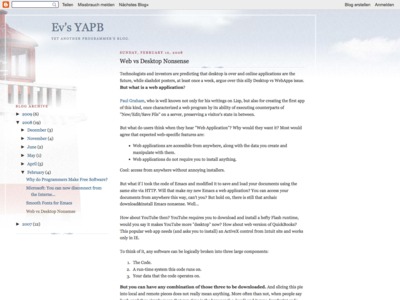 "If a web application does not really need to run inside the browser, why does everybody expect Microsoft to ship an online version of their popular Office suite in the fashion similar to Google Docs? Technically speaking, to release a viable web version of Office they may just add an HTTP storage support with basic collaboration features into Word and Excel. Such product would run only on Windows and Macs which makes it similar to the web version of QuickBooks.

Can we see past the browser? Can we accept that browser is just a runtime library that most people do not need to download to consume your application? If so, then rendering Google Docs obsolete should be as simple as picking a more powerful platform to develop for.

[...] I want a real web-platform to build on. Google docs and Zoho Apps are a joke - their "word processors" are weaker than WordPad, which appeared in Windows 95 and had always been nothing more than a "toy editor" ever since. Now you stick THAT into a browser and declare it an Office killer just because I can access my primitively formatted documents from anywhere? Come on, the "anywhere" part should not come at expense of losing 90% of other features."

(via chromatic - The Magic of Web Apps is HTTP, Not the Browser)

"When you have multiple people contributing to a page it’s handy to know when and what changed since your last visit. We’ve made this really easy with the new Backpack.

If you visit a page that changed since your last visit you’ll see a sticky note in top right corner of the page."

"From a user perspective it’s pretty simple: You hand the web service unstructured text (like news articles, blog postings, your term paper, etc) and it returns semantic metadata in RDF format. What’s happening in the background is a little more complicated.

Using natural language processing and machine learning techniques, the Calais web service looks inside your text and locates the entities (people, places, products, etc), facts (John Doe works for Acme Corp) and events (Jane Doe was appointed as a Board member of Acme Corp) in the text. Calais then processes the entities, facts and events extracted from the text and returns them to the caller in RDF format."

(via Slashdot - Semantic Web Getting Real)

"The magic solution is simply to use JODConverter with OpenOffice. In particular, I downloaded OpenOffice 2.3.1 for OS X, started it as “headless”:

and then used JODConverter commandline to convert files:

"What I think does ultimately matter is the ability of professional media to build specialized interfaces and vertical data stores that are suited to their niche, hopefully harnessing data and services from the consumer internet, and mashing them up with specialized, perhaps private, data stores. Put that together with metadata for programmable re-use, and you may really have something."

The future of XML

Elliotte Rusty Harold at IBM developerWorks - The future of XML:

"Of course, the most important conversion isn't from OpenDoc to OOXML or vice versa: it's a down conversion from either OpenDoc or OOXML to XHTML. The HTML exporters in OpenOffice and Microsoft Office are uniformly atrocious. Look for third-party developers to pick up the slack. Most important, look for individual corporate developers and webmasters to begin publishing custom templates for their sites. This will enable regular folks to write in Microsoft Word as they're accustomed to doing and then upload their musings straight into the local content-management system. Editing and reviewing tools can be built right in.

[...] Traditionally, you see two hard problems in training non-techies to write for the Web: teaching them semantic markup and showing them how to use FTP. (Remember, many nontechnical users can't even use the standard File Open dialog box. They store everything in the My Documents folder or on the desktop. They're lost if they accidentally put a file somewhere else. Programmers understand hierarchies, but many users don't think that abstractly.)

XML-enabled word processors like OpenOffice and Microsoft Word solve the first problem. The Atom Publishing Protocol solves the second. APP will do to do for Web authoring what HTTP did for Web browsing: provide a standard protocol that a variety of independent clients and servers can use to communicate without prior agreement or a shared conceptual model.

[...] Query is finally ready for production, and APP is ready to break out. If I was looking to invest money or time in XML, these are the technologies I'd focus on. The world might not need yet another content-management system, blog engine, or bulletin board; but it absolutely could use each of these if they stored and searched their content with a native XML database and published to it with APP."

"So after months of wearing jeans, chugging caffeine, cluttering your desk with sketches and reference material, you clean yourself up, put on a nice pair of pants, comb your hair, and sell again. Although most organizations have a sales force and a marketing department, a savvy customer will invariably want technical details that a non-coder can’t supply. As a lead developer on a project, it falls to you to instill confidence, to speak articulately and passionately about the appropriateness and worth of your solution.
Again, as before, pride is a weakness here, because no matter how good you are, someone will always ask if your software can do something it can’t — user’s are never really satisfied. So you think back to the design process, you remind them when they had a part in the decisions, and you attempt to impress upon them respect for the solution you have now, while acknowledging that there will always be a version 2.0."

One year after the Switch, I'm still quite happy with my MacBook Pro (now running Leopard). Although it took me a couple of weeks to get accustomed to the differences in keyboard layout (@, Cmd vs. Ctrl, brackets etc.)...

Interesting: Just 13 months ago (as it has been for more than ten years), every laptop and desktop computer in our company was running Windows (with Linux servers and a few Macs for testing). Today one third of the company works on a Mac...