The RIA and the Polyglot VM 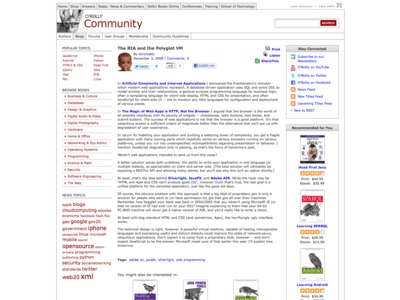 chromatic at O'Reilly Broadcast – The RIA and the Polyglot VM:

"Of course, the obvious problem with this approach [of Silverlight, JavaFX, and Adobe AIR] is that a big blob of proprietary goo is only a solution for people who want to (or have permission to) get that goo all over their machines. Remember how boggled your bank was back in 2004/2005 that you weren't using Microsoft IE (or that no version of IE had ever run on your OS)? Imagine explaining to them that your 64-bit PC-BSD machine will never get a native version of AIR, and you'd really like to write a check.

At least with bog-standard HTML and CSS (and sometimes, Ajax), the horrifyingly ugly interface works.

The technical design is right, however. A powerful virtual machine, capable of hosting interoperable languages and expressing useful and distinct dialects could improve the state of network-savvy, ubiquitious applications. Don't expect it to come from a proprietary blob, however -- and don't expect JavaScript to be the answer."