The Other Half of "Artists Ship" 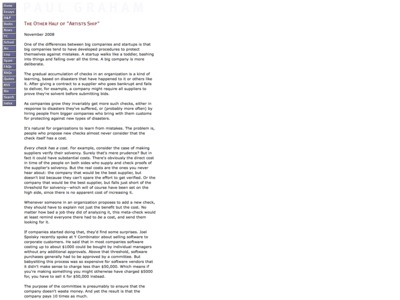 Paul Graham – The Other Half of "Artists Ship":

"Programmers are unlike many types of workers in that the best ones actually prefer to work hard. This doesn't seem to be the case in most types of work.

[…] If you have an idea for a new feature in the morning, you can write it and push it to the production servers before lunch. And when you can do that, you have more ideas.

Steve Jobs's famous maxim "artists ship" works both ways. Artists aren't merely capable of shipping. They insist on it. So if you don't let people ship, you won't have any artists."