How do You Avoid The Muse? Let's make a list… 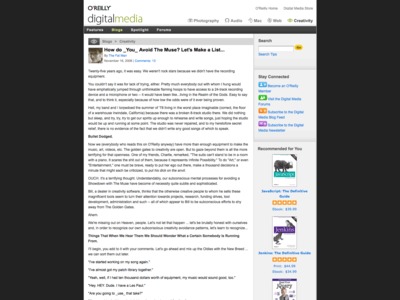 The Fat Man – How do You Avoid The Muse? Let's make a list…:

"Pretty much everybody out with whom I hung would have emphatically jumped through unthinkable flaming hoops to have access to a 24-track recording device and a microphone or two--it would have been like...living in the Realm of the Gods.

[…] Now that we (everybody who reads this on O'Reilly anyway) have more than enough equipment to make the music, art, videos, etc. The golden gates to creativity are open. But to gaze beyond them is all the more terrifying for that openness. One of my friends, Charlie, remarked, "The suits can't stand to be in a room with a piano. It scares the shit out of them, because it represents Infinite Possibility.""