There's a separate page about the 1.0 branch.

Scott Adams at The Dilbert Blog - Invent This Product:

"When the vacation is over, the scrapbook is 85% complete. You just have to check its assumptions and add/correct any descriptors you want.

You could run it as a slide show, with a little icon of a car traveling from location to location on the Google map, while the calendar date appears in the corner. When the icon reaches a destination from which there are photos, it displays them in a slide show. Optionally, the system could bring in pictures from other sources to beef up your scrapbook. For example, if you visited the Grand Canyon, it could bring in some stock pictures to round out your album. It could also capture a screen shot of the hotel or resort’s web site during the period you visited."

Rick Jelliffe at XML.com - The fall of the Desktop and the File and the rise of Topical Interfaces and Topical Documents:

"The rise of Topics represents a great challenge to operating system and desktop suite vendors. When we look at Windows, or Mac or Linux window managers, we see that they really interact with the user at the wrong level. They say that the topic the user is interested in is applications and files. But how many people nowadays start their computer interaction with a web browser pointed to Google? There are still people whose organizing topic of interest in their computer interaction is the file or application, of course, but they have been swamped by people who are interested in the topic."

Holding a Program in One's Head

"Perhaps it will help to understand that the way programmers behave is driven by the demands of the work they do. It's not because they're irresponsible that they work in long binges during which they blow off all other obligations, plunge straight into programming instead of writing specs first, and rewrite code that already works. It's not because they're unfriendly that they prefer to work alone, or growl at people who pop their head in the door to say hello. This apparently random collection of annoying habits has a single explanation: the power of holding a program in one's head."

"The Welcome Tab in Backpack provides even more information than the old Primer, but it doesn’t get in your way. You can keep the tab around for reference as long as you’d like without it cluttering up your pages or pushing down your content. And when you’re ready you can hide the tab permanently if you’d like.

[...] We think this is a great solution to a common scenario—getting people started but keeping the “getting started” info around for later."

Make sure to read the comments as well.

I'll push and you pull. The mashup approach to application integration

Sean McGrath at ITworld.com - I'll push and you pull. The mashup approach to application integration:

"The mashup phenomenon begs a very pertinent question: can all application integration scenarios that we naturally express in push-centric language, be implemented with pull-centric designs? Is there a limit to what you can do with a mashup - something that would force you to a push-centric approach instead? If every time A needs to send something to B why not get A to publish it, with an RSS/Atom feed instead. Then B can just poll the published information as it sees fit."

InDesign CS3 and XML Authoring: Could be Good

Eliot Kimber - InDesign CS3 and XML Authoring: Could be Good:

"The main gotcha here is that InDesign is sensitive to newlines in the XML data, because newlines trigger the application of paragraph styles. What I've found so far is that you have to manage the text content very carefully so that you only emit newlines at true paragraph boundaries.

[...] 6. Switch to InDesign and bring up the Links pallet. In that you'll find your XML document listed. Select it and click the "update link" button. Magically, your XML changes are re-imported into InDesign and the styles applied.

Whether you need a simple e-mail registration form, forms that work with your database or powerful business forms for working with XML, Live Forms helps you create amazing forms without writing a single line of code."

"To provide a more suitable tool for Web-based apps, Mozilla Platform Evangelist Mark Finkle has been working on WebRunner, a site-specific browser (SSB) that's designed to work exclusively with one application at a time."

"Here’s my long bets for the moment, with the only caveat that in some cases I pick specific implementations as exemplars of a larger field.

"Search and web feeds go together pretty naturally, as anyone who has set up some kind of vanity search feed knows. [...] Rather than having to poll the search engine yourself and having to remember which results you have seen, your reader will simply alert you when there are new results. This simple but very useful concept is the core idea behind the OpenSearch specification."

"Non-trivial contains dangerous unknowns. Some part of it is not yet understood, or lies outside the range of things the programmer has done before, or can quickly imagine a workable solution to. The more experienced the programmer who tells you a problem is non-trivial, the more concerned you should be." 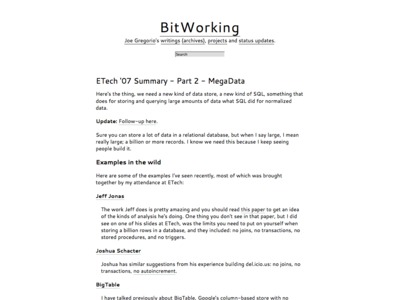 "If you want to scale to the petabyte level, or the billion requests a day, you need to be:

Distributed
The data has to be distributed across multiple machines.
Joinless
No joins, and no referential integrity, at least at the data store level.
De-Normalized
No one said this explicily, but I presume there is a lot of de-normalization going on if you are avoiding joins.
Transcationless
No transactions

Those constraints represent something fundamentally different from a relational database."