"When the time has come for creating user stories, one of the developers gets together with a customer representative. The customer is responsible for formulating the user stories. The developer may use a series of questions to get the customer going, such as asking if some particular functionality is desired, but must be careful not to dominate the idea creation process." 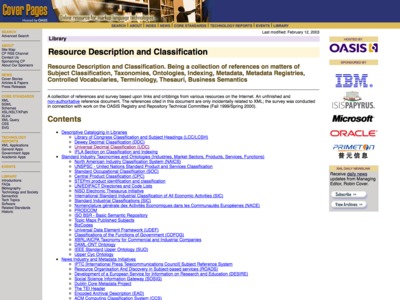 "This is a stripped-down implementation of the server side of the Atom Publishing Protocol as an Apache module, implemented in C."

"When you're typing a message/comment, just put "[UPDATE]" in there. [...] Basecamp turns your update text into a little tag graphic." 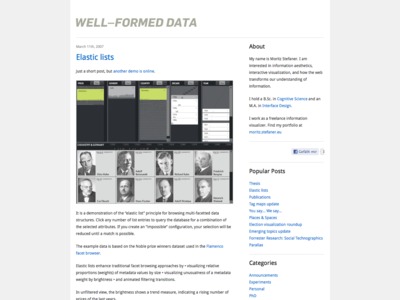 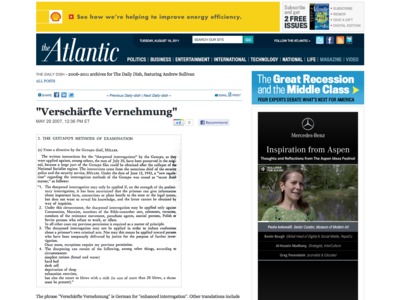 "Andrew Sullivan points out prior use of the term “Enhanced Interrogation”, promoted not only by the malevolent thickheads of the Bush administration but by most of the Republican candidates for President; prior use, that is, by the Gestapo. Meanwhile Dick Cheney argues that the Geneva Convention and the U.S. Constitution are tools for terrorists. [...] In the American context, near as I can tell, at the moment “conservative” means “pro-torture” which means “scum”."

"The Nazi defense of the techniques is almost verbatim that of the Bush administration... [...] Freezing prisoners to near-death, repeated beatings, long forced-standing, waterboarding, cold showers in air-conditioned rooms, stress positions [Arrest mit Verschaerfung], withholding of medicine and leaving wounded or sick prisoners alone in cells for days on end - all these have occurred at US detention camps under the command of president George W. Bush. Over a hundred documented deaths have occurred in these interrogation sessions.

[...] What I am reporting is a simple empirical fact: the interrogation methods approved and defended by this president are not new. Many have been used in the past. The very phrase used by the president to describe torture-that-isn't-somehow-torture - "enhanced interrogation techniques" - is a term originally coined by the Nazis. The techniques are indistinguishable. The methods were clearly understood in 1948 as war-crimes. The punishment for them was death."