Ensuring your HTML emails look great and get delivered

"In this article that goes hand-in-hand with the release of Emails-Standards.org, David Greiner explains what you need to do to ensure that your emails not only look great in today’s email clients but also actually make it to where they’re going."

Amazon.com: "The Alexa Site Thumbnail web service provides developers with programmatic access to thumbnail images for the home pages of web sites. It offers access to Alexa's large and growing collection of images, gathered from its comprehensive web crawl.

[...] If a requested thumbnail image does not yet exist, it will be automatically generated within 24 hours."

How can I learn to scale my project?

Todd Hoff at High Scalability - How can I learn to scale my project?:

"The center of your design should be the data store, not a process. You transition the data store from state to state, securely and reliably, in small increments.

[...] Viewing an application as a series of state transitions instead of a blizzard of actions and events is a way under appreciated design perspective. This is one of they key design approaches for making robust embedded systems."

"A J2EE web service client sends the document to the StarOffice 8 Server and receives the converted Acrobat PDF document immediately." 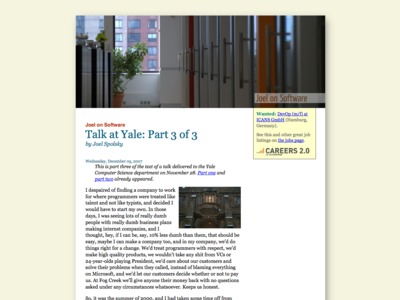 "Being able to write clearly on technical topics is the difference between being a grunt individual contributor programmer and being a leader." 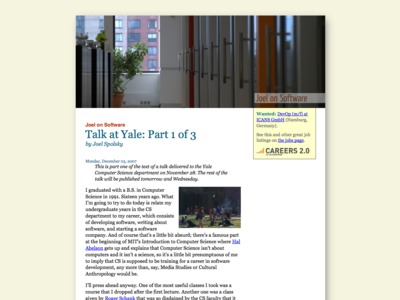 "The old testers at Microsoft checked lots of things: they checked if fonts were consistent and legible, they checked that the location of controls on dialog boxes was reasonable and neatly aligned, they checked whether the screen flickered when you did things, they looked at how the UI flowed, they considered how easy the software was to use, how consistent the wording was, they worried about performance, they checked the spelling and grammar of all the error messages, and they spent a lot of time making sure that the user interface was consistent from one part of the product to another, because a consistent user interface is easier to use than an inconsistent one.

None of those things could be checked by automated scripts. And so one result of the new emphasis on automated testing was that the Vista release of Windows was extremely inconsistent and unpolished. Lots of obvious problems got through in the final product… none of which was a “bug” by the definition of the automated scripts, but every one of which contributed to the general feeling that Vista was a downgrade from XP."

"Creating a high-quality chart for the Web can be a challenging task, but open source software like Open Flash Chart (OFC) makes it a cinch. As you might guess from its name, the core engine of OFC is written in Adobe Flash. Although this means that users need a Flash browser plugin to view charts created with OFC, this approach has a significant advantage: it allows you to produce professional-quality graphs with minimum effort, because the core engine does all the heavy lifting, and all you need to do is to specify configuration options for your chart and feed data into it."