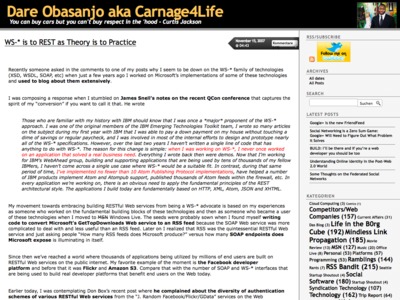 "Those who are familiar with my history with IBM should know that I was once a *major* proponent of the WS-* approach. [...] I was involved in most of the internal efforts to design and prototype nearly all of the WS-* specifications. However, over the last two years I haven’t written a single line of code that has anything to do with WS-*. The reason for this change is simple: when I was working on WS-*, I never once worked on an application that solved a real business need. Everything I wrote back then were demos. Now that I’m working for IBM’s WebAhead group, building and supporting applications that are being used by tens of thousands of my fellow IBMers, I haven’t come across a single use case where WS-* would be a suitable fit. In contrast, during that same period of time, I’ve implemented no fewer than 10 Atom Publishing Protocol implementations, have helped a number of IBM products implement Atom and Atompub support, published thousands of Atom feeds within the firewall, etc."

Dare Obasanjo - WS-* is to REST as Theory is to Practice:

"My movement towards embracing building RESTful Web services from being a WS-* advocate is based on my experiences as someone who worked on the fundamental building blocks of these technologies and then as someone who became a user of these technologies when I moved to MSN Windows Live. The seeds were probably sown when I found myself writing code to convert Microsoft’s GetTopDownloads Web service to an RSS feed because the SOAP Web service was more complicated to deal with and less useful than an RSS feed. Later on I realized that RSS was the quintessential RESTful Web service and just asking people “How many RSS feeds does Microsoft produce?” versus how many SOAP endpoints does Microsoft expose is illuminating in itself."

"In this final article of the series, we proceed with another handful of useful JavaScript case studies that focus on manipulating and rewriting the HTML page on-the-fly using Document Object Model (DOM).

[...] Dynamic Tables: It is often desirable in a user interface to have the user input data into a variable number of rows. For example, when filling out an order form, the customer will fill in one item per row. With JavaScript, we no longer have to worry if we put enough space for the order though—let the user add and delete rows as needed!"

The Future of Reading (A Play in Six Acts)

Mark Pilgrim about the Amazon Kindle - The Future of Reading (A Play in Six Acts):

"Another possible change: with connected books, the tether between the author and the book is still active after purchase. Errata can be corrected instantly. Updates, no problem.

Newsweek, The Future of Reading

Day by day and almost minute by minute the past was brought up to date. In this way every prediction made by the Party could be shown by documentary evidence to have been correct; nor was any item of news, or any expression of opinion, which conflicted with the needs of the moment, ever allowed to remain on record. All history was a palimpsest, scraped clean and reinscribed exactly as often as was necessary.

"Zend Platform can intercept calls to files that are larger than a given, configurable size, offloading those calls directly to Apache to boost performance."

The Future of Reading

"Microsoft's Bill Hill has a riff where he runs through the energy-wasting, resource-draining process of how we make books now. We chop down trees, transport them to plants, mash them into pulp, move the pulp to another factory to press into sheets, ship the sheets to a plant to put dirty marks on them, then cut the sheets and bind them and ship the thing around the world. "Do you really believe that we'll be doing that in 50 years?" he asks."

"When the TechSmith folks told me about Jing I was thinking about screencasting at a different level: professional quality, careful editing, multiple delivery formats. So I made note of it, but didn’t fully appreciate its significance."

How to demo software 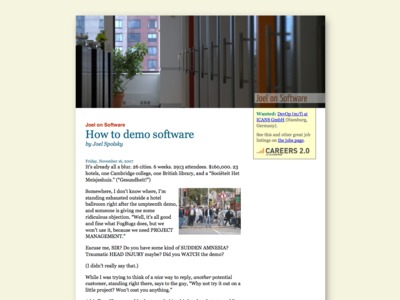 Joel Spolsky - How to demo software:

"As you go along, be sure to accidentally bump into all the nice little “fit and finish” features of your product. Oh look, that column is halfway off screen. No problem. I’ll just drag it over. (“Wha!” the audience gasps, “you dragged a column in HTML?”) Oh, look, this feature is supposed to be done by next Tuesday. I’ll type “next tuesday” in the due date box. (“OMG!” they squeal. You typed “next tuesday” and it was replaced with “11/20/2007”). Those nice little touches you put so much hard work into are not the meat of the demo, so don’t talk about them, just act nonchalant. What, doesn’t every web app let you resize and drag columns?"

PHProjekt - Summer of PHProjekt Addons: "PFolders is a WebDAV Interface for PHProjekt which enables you to access the file repository of the filemanager from PHProjekt without the web interface of PHProjekt."

KnowledgeTree - Release Notes for Version 3.4.5: " WebDAV and Network Pack made Open Source and added to core." 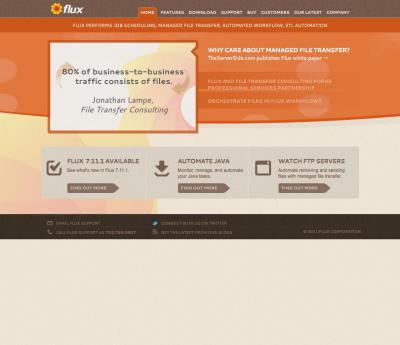 "From the Flux Operations Console, you can check on the status of jobs and workflows, remove jobs, recover jobs that have failed, reschedule jobs, perform other job maintenance, and monitor file transfer progress." 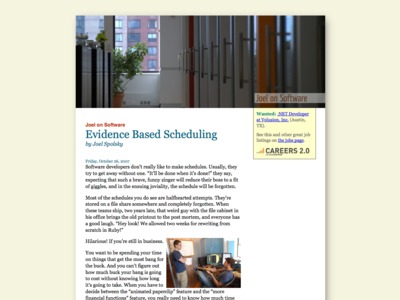 Setting a 16-hour maximum forces you to design the damn feature."

"Alfresco JLAN uses a virtual file system interface that allows you to plug in your own file system implementation with the core server handling all of the network protocol exchange between the client and server. JLAN is also the only Java implementation of Window’s CIFS (Common Internet File System), in addition to supporting NFS and FTP."

One of the best search experiences

Ed Stevenson at Really Strategies Blog - One of the best search experiences:

"On kayak.com, you are offered a set of dials and levers for adjusting the query, such as eliminating airlines, changing departure time frames, or looking for the shortest trip. You want to leave between 10 and 12, just move the dial and the page is updated with results that match. You want to find the shortest trip. Move the lever.

Does your content, or its metadata, lend itself to this type of search? Is there a way to present options for your customers to refine search results in a more appealing way?"

"Because shared nothing [as in IBM DB2] does not typically have nearly as severe bus or resource contention as shared-memory [MySQL] or shared-disk [Oracle RAC] machines, shared nothing can be made to scale to hundreds or even thousands of machines. Because of this, it is generally regarded as the best-scaling architecture. "

"A few years back, Sun Microsystems developed DTrace: a new and innovative way to trace running software on live systems. DTrace enables developers and administrators to "see" what their code, and others' code, is doing in a flexible and dynamic way. With the release of Leopard, Apple has brought DTrace to Mac OS X.

This article will begin with a crash course in DTrace. If you're already a seasoned DTrace veteran, feel free to skip that section. We will then move on to some examples of how to use DTrace by exploring our Leopard systems and discovering what makes them purr."