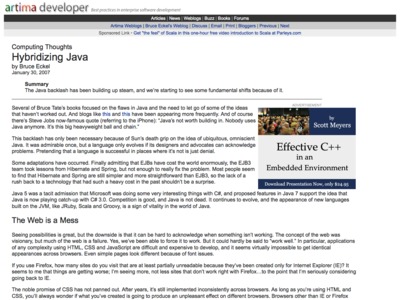 "It’s not impossible to build GUI applications with Java, but it’s been 10 years and there are still installation hiccups with applets, Java WebStart, and regular applications. After 10 years, people don’t trust it anymore. If it’s not there after 10 years, then I’m going to go out on a limb and say that someone doesn’t consider this problem important enough to fix. And even if they did, there have been so many bad experiences among consumers that it would take years to get the trust back.

[...] Allow for a moment the possibility that, after 10 years, Java is not going to take over the world of RIAs. Further allow that Ajax is just “how JavaScript was supposed to work in the first place,” but that the limitations imposed by browsers, HTML and CSS committees seem unlikely to let it expand beyond its current bounds. What are we going to use to build RIAs?

[...] One of the most appealing things about Flex is that Flash was created with the idea of UI first. In a very real sense, it’s a domain-specific language (DSL) for graphics, multimedia, and UIs, whereas most other solutions have been languages with UI libraries tacked on afterwards. Because of this design goal, Flex and Flash provide a complete, unlimited, flexible tool to build user experiences."

Some of My Software Opinions 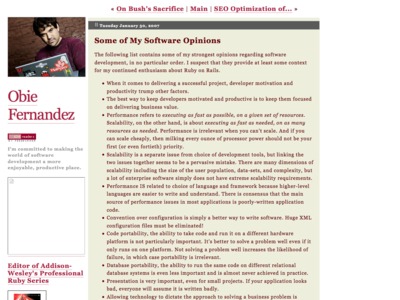 Obie Fernandez - Some of My Software Opinions:

"The best way to keep developers motivated and productive is to keep them focused on delivering business value."

A guide for switching to a Mac

Adam Pash - A guide for switching to a Mac:

"When I bought my first Mac a few short months ago, it took a while to figure out how to do all the stuff I already knew how to do on my PC. While it's my job to spend time figuring that sort of thing out, there's no need for you to waste your precious time figuring out the minutia of a new operating system. To ease this transition for all of the new Mac owners out there, I've put together a quick guide for Mac newbies making the big switch."

53 CSS-Techniques You Couldn’t Live Without

"Over the last few years web-developers have written many articles about CSS and developed many useful techniques, which can save you a lot of time - of course, if you are able to find them in time. Below you’ll find a list of techniques we , as web-architects, really couldn’t live without."

IBM Wants Many Eyes on Visualization

"IBM today announced Many Eyes, a site for sharing and commenting on visualizations. [...] As with swivel, users can upload any data set, but the tools for visualizing and graphing the data are much richer."

When installed, a new "Photo Info" item appears on the context menu for files selected in Windows Explorer. To use, simply select one or more image fiiles, right-click and choose "Photo Info" to open the Photo Info properties editor. You can edit metadata for files individually, or all together as a batch. Photo Info reads and writes metadata in IPTC and XMP formats (depending on file type)."

"IBM Lotus Quickr will provide ready-to-use team places where team members -- inside or outside the firewall -- can share information and collaborate on projects online.

[...] Users can access content in Lotus Quickr right from their familiar Microsoft Windows desktop. They simply drag documents from their C-drive folders to personal or shared Lotus Quickr places. Or, they can save documents to Lotus Quickr folders directly from the application they are using."

[...] Lotus Connections integrates across the Lotus portfolio, combining the strength of the industry's leading real-time, messaging and portal capabilities with the power of social software. For example, with Lotus Notes version 8 and Lotus Connections, customers will be able to access Activities on the side bar from their Lotus Notes inbox and drag and drop email messages directly into an activity. Websphere Portal and Lotus Connections customers can leverage the light weight portlets to display new Dogear bookmarks, recent blogs entries and search Profiles to locate an expert.

[...] Lotus Connections also integrates with Microsoft Active Directories. With support for open standards such as ATOM and REST, Lotus Connections makes it easy for enterprises to integrate social software into their existing IT infrastructures and their day-to-day tools." 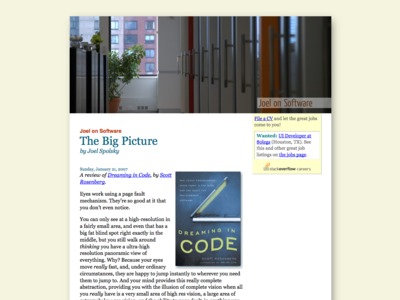 I can’t tell you how many times I’ve been in a meeting with even one or two other programmers, trying to figure out how something should work, and we’re just not getting anywhere. So I go off in my office and take out a piece of paper and figure it out. The very act of interacting with a second person was keeping me from concentrating enough to design the dang feature.

What kills me is the teams who get into the bad habit of holding meetings every time they need to figure out how something is going to work. Did you ever try to write poetry in a committee meeting? It’s like a bunch of fat construction guys trying to write an opera while sitting on the couch watching Baywatch." 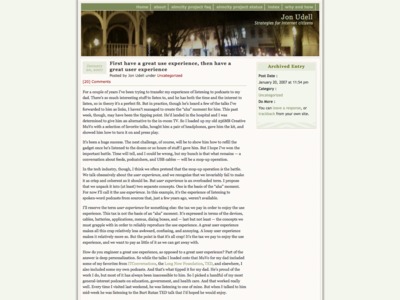 "We talk obsessively about the user experience, and we recognize that we invariably fail to make it as crisp and coherent as it should be. But user experience is an overloaded term. I propose that we unpack it into (at least) two separate concepts. One is the basis of the “aha” moment. For now I’ll call it the use experience. In this example, it’s the experience of listening to spoken-word podcasts from sources that, just a few years ago, weren’t available."

PHP vs. Ruby on Rails. An evolutionary story of a Web Developer and his tools. 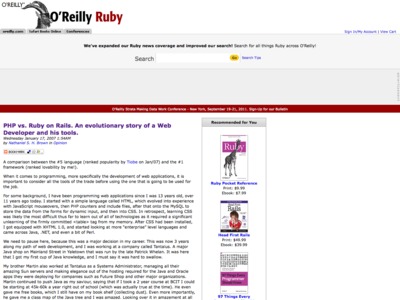 Nathaniel S. H. Brown - PHP vs. Ruby on Rails. An evolutionary story of a Web Developer and his tools:

This week, my 2-year-old Acer TravelMate running Windows XP has been replaced by a 17" Apple MacBook Pro. The switch went surprisingly well so far (with a little help from Mac-experienced colleagues).

"Seems to me that everywhere I turn, I'm hearing about someone doing something cool with Amazon S3. Here's a collection of some of the things I've noticed."

The Need for Creating Tag Standards 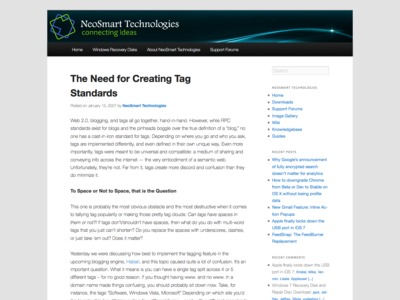 The NeoSmart Files - The Need for Creating Tag Standards:

"Basically, it’s too late for a tagging standard that will be used unanimously throughout the web. A truly semantic web most certainly won’t ever exist because of the reluctance to change and the unwillingness to compromise and accept defeat. A semantic web requires objective analysis of methods and data, culminating in honestly evaluated options, and immediate acceptance of the outcome. But that’s never going to happen." 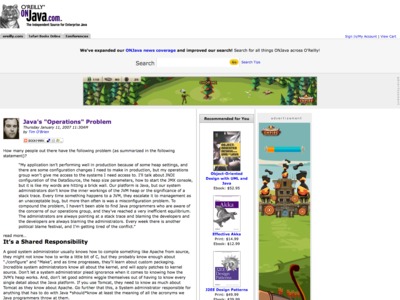 "Firebug integrates with Firefox to put a wealth of development tools at your fingertips while you browse. You can edit, debug, and monitor CSS, HTML, and JavaScript live in any web page." 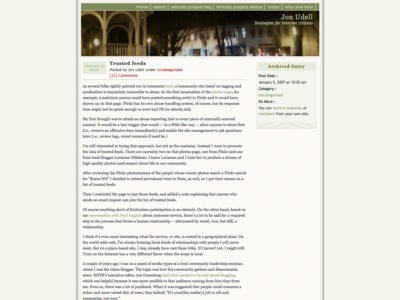 "As several folks rightly pointed out in comments here, a community site based on tagging and syndication is exquisitely vulnerable to abuse. In the first incarnation of the photos page, for example, a malicious person could have posted something awful to Flickr and it would have shown up on that page." 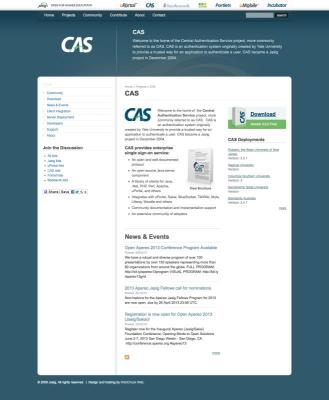 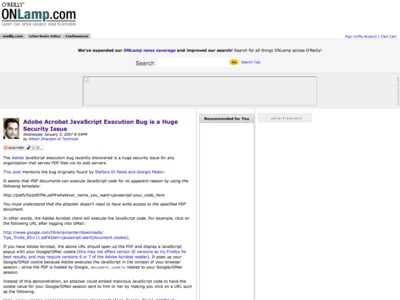 "The Adobe JavaScript execution bug recently discovered is a huge security issue for any organization that serves PDF files via its web servers.

[...] An attacker could embed malicious JavaScript code to have the cookie value for your Google/GMail session sent to him or her by making you click on a URL." 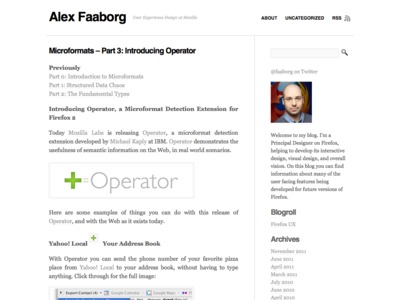 "Today Mozilla Labs is releasing Operator, a microformat detection extension developed by Michael Kaply at IBM. Operator demonstrates the usefulness of semantic information on the Web, in real world scenarios." 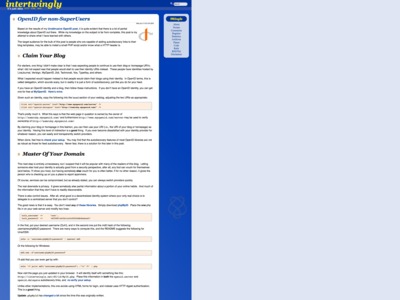 "Based on the results of my Unobtrusive OpenID post, it is quite evident that there is a lot of partial knowledge about OpenID out there. While my knowledge on the subject is far from complete, this post is my attempt to share what I have learned with others. The target audience for the bulk of this post is people who are capable of adding autodiscovery links to their blog templates, may be able to install a small PHP script and/or knows what a HTTP header is."