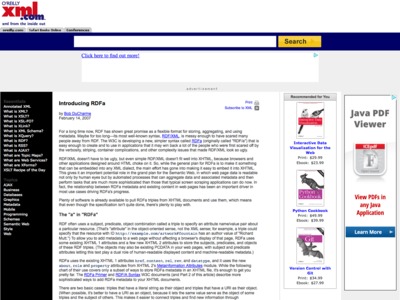 "For a long time now, RDF has shown great promise as a flexible format for storing, aggregating, and using metadata. Maybe for too long—its most well-known syntax, RDF/XML, is messy enough to have scared many people away from RDF. The W3C is developing a new, simpler syntax called RDFa (originally called "RDF/a") that is easy enough to create and to use in applications that it may win back a lot of the people who were first scared off by the verbosity, striping, container complications, and other complexity issues that made RDF/XML look so ugly."