Crazy Egg: "Get a clear picture of where your visitors are clicking and enhance your site's results."

"With a priority queue, you have a dumping-ground for any and all ideas (and bugs) that people suggest as the project unfolds. No engineer is ever idle, unless the queue is empty, which by definition means the project has launched. Tasks can be suspended and resumed simply by putting them back in the queue with appropriate notes or documentation. You always know how much work is left, and if you like, you can make time estimates based on the remaining tasks. You can examine closed work items to infer anything from bug regression rates to (if you like) individual productivity. You can see which tasks are often passed over, which can help you discover root causes of pain in the organization. A work queue is completely transparent, so there is minimal risk of accidental duplication of work.

Unfortunately, a work queue doesn't make for a good marketing platform for seminars and conferences. It's not glamorous. It sounds a lot like a pile of work, because that's exactly what it is." 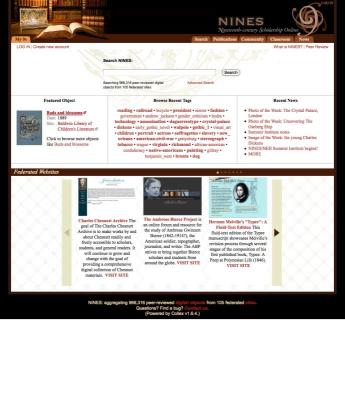 "I really found the Collex interface concept to be very interesting. Everything is a contraint or limit and you can easily add or invert the contraint. It’s also easy to add things to a personal collection and parts of the personal collection then become facets/contraints themselves. He’s really using all of the metadata (archive and user) to it’s full extent. He also has more plans including “exhibits” where people can “curate collections”. These collections themselves can then become objects in the index and so on. "

"The goal of Varnish is to be a very fast, stable and effective light-weight HTTP accelerator daemon, by using modern and effective technologies.

[...] When we set out to design and implement a high-performance HTTP accelerator about a year ago, we knew that we could improve on the state of the art, but we did not quite realize how much room for improvement there was. A year later, we have an HTTP accelerator that can run at wire speed on cheap off-the-shelf hardware. The difference in performance between Varnish and our closest open source competitor is almost two orders of magnitude."

Watching out for our own security

Jon Udell at InfoWorld - Watching out for our own security:

"Desktop and server operating systems know, and can report, when you’ve logged in and what you’ve been doing. True, a savvy impersonator can erase her footsteps, but if you’re motivated to look, there’s a decent chance you can detect an intrusion.

Applications and services delivered through the Web usually don’t afford the same opportunity. If a failed password-guessing attack triggers a temporary lockdown of my online bank account, I have some hope that I’ll be promptly notified -- though I’m not about to try the experiment in order to find out.

But what if shoulder-surfing or a lucky guess yields up my credentials to an evildoer? Typically there’s no way for me to monitor the account for amounts, times, or IP addresses that only I would recognize as suspicious.

They should at least show me the last log-in time. A more complete view of all account activity would be ideal."

Rails, Databases, ActiveRecord and the path towards damnation

Ola Bini - Rails, Databases, ActiveRecord and the path towards damnation:

"Actually, the worst part with MySQL is that ActiveRecord have been designed based on it. [...] It is incredibly hard to get other databases working with Rails, and even if you do get them working, it will be slow. Really slow. Take Oracle. Oracle lives and dies by prepared statements. But there is no sane way to do this in Rails.

[...] There are much more important issues in database engineering than normalization, and lets face it, most Rails developers produce pretty crappy databases."

I Think, Therefore I eXist ...

"eXist exposes a WebDAV interface that any WebDAV enabled software can use to both retrieve and write content from/to the database. For instance, from Oxygen (my all time favorite XML editor) I can select Open URL, pass the appropriate URL (http://localhost:8080/exist/webdav/db/ on the default) and you can then open XML “files” from the database, work on them, and save them, all without realizing that these are not files at all. From both Internet Explorer and Konqueror, you can also create Folders and drag XML content into them, creating collections and populating them very simply."

"Here’s the Atom dream: A “Publish” button on everything. On every word processor and email reader and web browser and cellphone and PDA and spreadsheet and photo-editor and digicam and outliner and sales-force tracker. Really, everywhere. If it doesn’t have a “Publish” button, it’s broken." 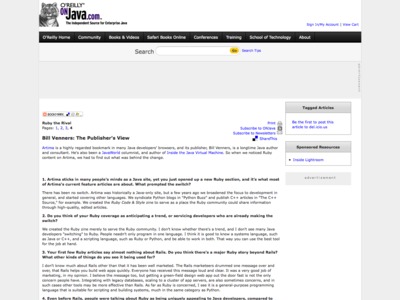 "I don't know much about Rails other than that it has been well marketed. The Rails marketeers drummed one message over and over, that Rails helps you build web apps quickly. Everyone has received this message loud and clear. It was a very good job of marketing, in my opinion. I believe the message too, but getting a green-field design web app out the door fast is not the only concern people have. Integrating with legacy databases, scaling to a cluster of app servers, are also sometimes concerns, and in such cases other tools may be more effective than Rails."

"We use common terms in english to express how we identify a date coming up, or a date in the past. Such as “Next Tuesday”, “Last Month”, or even as simple as “Friday”. We clearly know which date that identifies, but until now, a computer had no idea, as far as forms were concerned."

Reminds me of what I read about Lotus Agenda.

"Oh, and I hate MS Word with the fiery passion of a thousand burning suns. I'd sooner chew off my own arm than spend any time actually authoring words in Word. I've spent so many years authoring XML that having to deal with $*%&# like doing a backspace at the end of a paragraph destroys its formatting with no good way to get it back or the complete inability to do autonumbering and any other number of just stupid things that people tolerate day and after day for reasons that I can't understand and the egregious waste of productivity that I've observed in my own XML-steeped colleagues who are literally sitting next to me just makes me want to SCREAM. But that's just me."

"After forms, data tables are likely the next most ubiquitous interface element designers create when constructing Web applications. Users often need to add, edit, delete, search for, and browse through lists of people, places, or things within Web applications. As a result, the design of tables plays a crucial role in such an application’s overall usefulness and usability. But just like the design of forms, there’s more than one way to design tabular data."

The big idea is "messaging"

"The big idea is "messaging" -- that is what the kernal of Smalltalk/Squeak is all about (and it's something that was never quite completed in our Xerox PARC phase). The Japanese have a small word -- ma -- for "that which is in between" -- perhaps the nearest English equivalent is "interstitial". The key in making great and growable systems is much more to design how its modules communicate rather than what their internal properties and behaviors should be. Think of the internet -- to live, it (a) has to allow many different kinds of ideas and realizations that are beyond any single standard and (b) to allow varying degrees of safe interoperability between these ideas."

The internets are made of tubes

Avi Bryant - The internets are made of tubes:

"With Dabble, anyone can now import data from a feed, combine it with data from elsewhere, restructure and filter it as needed, and push it out as another feed so the process can repeat." 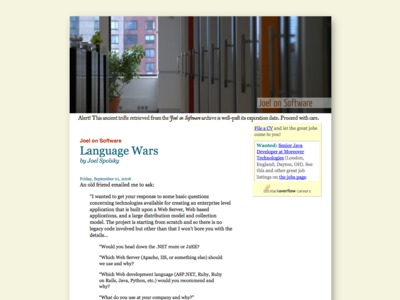 "These debates are enormously fun and a total and utter waste of time, because the bottom line is that there are three and a half platforms (C#, Java, PHP, and a half Python) that are all equally likely to make you successful.

[...] I for one am scared of Ruby because (1) it displays a stunning antipathy towards Unicode and (2) it's known to be slow, so if you become The Next MySpace, you'll be buying 5 times as many boxes as the .NET guy down the hall. Those things might eventually be get fixed but for now, you can risk Ruby on your two-person dormroom startup or your senior project, not for enterprisy stuff where Someone is Going to Get Fired."

"The code extract below shows how SDO can be used to load the XML schema and a quotes document and then add a new quote entry to that document."

Google Revealed: The IT Strategy That Makes It Work

Thomas Claburn at InformationWeek - Google Revealed: The IT Strategy That Makes It Work:

"Lots of small, short-lived projects mean traditional project management software based on task lists isn't right for Google. For one thing, techies aren't very good at cataloging how they spend their hours. What they are good at, it turns out, is writing up a few short sentences or snippets about what they do each day. Those get compiled in a database along with periodic updates from project leaders about a team's deliverables. The project system tags the input by topic and routes to the appropriate people. "This is not hard AI," Merrill says. Still, who else manages workers like this?"