The new intranet: wikis and RSS?

But let’s not confuse the intranet with a wiki. The intranet is all-encompassing; the wiki is just a tool or even an emerging platform. Wiki software is not the new intranet platform. An intranet requires too much integration and networking. The wiki may however evolve into one of the most important employee collaboration tools on the intranet, but it’s hard to imagine it replacing a search engine or a content management system." 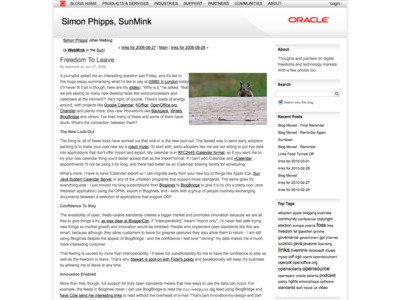 "If "interoperability" meant "import only", I'd never feel safe trying new things so market growth and innovation would be inhibited. People who implement open standards like this are smart, because although they allow customers to leave for greener pastures they also allow them to return - I am still using Bloglines despite the appeal of BlogBridge - and the confidence I feel over "owning" my data makes me a much more interesting customer.

That feeling is caused by more than interoperability - it takes full substitutability for me to have the confidence to stay as well as the freedom to leave. "

Can a federation tackle the data management puzzle?

Mario Apicella at InfoWorld - Can a federation tackle the data management puzzle?:

"Obviously, data indexing and search are prerequisites to analysis and classification, and handling those processes efficiently is a major requirement.

"Anybody can scale to handle billions of documents, but it's going to take a ton of hardware to do it," states Robert Lancaster, vice president of channel development at Fast Search and Transfer (FAST). "We can handle between 30 and 50 million documents on a single, commodity dual-CPU server."

Tech careers are on the wrong track

Tom Yager at InfoWorld - Tech careers are on the wrong track:

"IT careers require an understanding that the purpose of commercial computer systems is to serve people. Not to serve one another, not to serve database rows or HTTP packets, but to make people glad they’re using their computers instead of grappling with the latest work-around.

[...] I’m leaning toward the notion that American companies lowered their standards to ensure that they had no irreplaceable staff. A vital IT field is fueled by people you can’t afford to lose and workers competing to achieve that status." 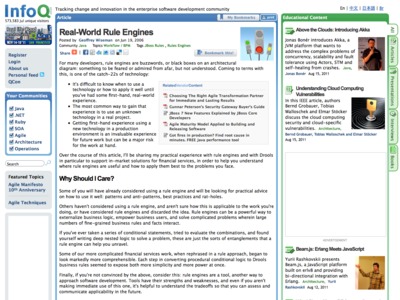 "For many developers, rule engines are buzzwords, or black boxes on an architectural diagram: something to be feared or admired from afar, but not understood. [...] Over the course of this article, I'll be sharing my practical experience with rule engines and with Drools in particular to support in-market solutions for financial services, in order to help you understand where rule engines are useful and how to apply them best to the problems you face.

[...] Although rule engines can be applied to just about any problem if you try hard enough, they are simply another tool in the toolbox. They don't replace constraint programming and solvers, artificial intelligence, workflow engines, decision tables or general-purpose programming languages; they simply supplement that set of tools with another."

"The free Underground PHP and Oracle Manual [PDF] is hot off the press."

The 7 (f)laws of the Semantic Web

Dan Zambonini at XML.com - The 7 (f)laws of the Semantic Web:

"Creating metadata and classifications is difficult (let’s not get started on Ontologies). People are biased (whether they mean to be or not), and fallible. Metadata, which the Semantic Web relies on, is not always going to be of great quality.

[...] My clients don’t want to create ontologies. They don’t want to map one set of data to another. They want to use something that’s out there and ready for them to use, and will give them the maximum benefit (so if the Imperial War Museum say that they have a tank from “World War One” and the Science Museum has a video of the firing mechanism from a gun from “World War One”, they can both use the same term/URI)."

"Tag clouds are only one, specific kind of weighted list. There are many kinds of mappings from visual features to underlying data that have not yet been exploited. How about trying some weighted lists that don't look like common tag clouds? For example, you could map font size to time, showing more recent tags in large sizes. Or, in a historical database, you could map font to decade or century, using progressively older- fashioned fonts for older data."