"PHPTMAPI implements a PHP API for manipulating topic maps, based on the TMAPI project."

"Spread is an open source toolkit that provides a high performance messaging service that is resilient to faults across local and wide area networks. Spread functions as a unified message bus for distributed applications, and provides highly tuned application-level multicast, group communication, and point to point support. Spread services range from reliable messaging to fully ordered messages with delivery guarantees." 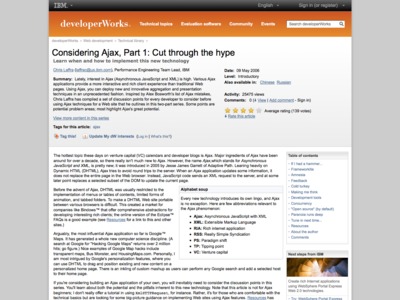 "The major reason for the success of the Web is the predictability and simplicity of its UI model. Basically, anyone can move a mouse, click on a link, move a scrollbar, and hit the Back button. With the growing popularity of Ajax, the risk is very real that developers will go overboard and essentially make everything clickable and change the UI in an unexpected and asynchronous manner. The last thing you want to do is force your user to think.

[...] In this installment of Considering Ajax, I discussed the hype that currently surrounds this technology. You also saw that reliable frameworks are still under construction, and that you should worry about navigation history, bookmarkability, feedback, persistence, concurrency, and security."

"What David’s afraid of, and with good reason, is the obvious alternative: storing all of the data as global session state, with each page (or a cookie) referencing a single session ID from which the rest of the information can be retrieved on the server side. The problem with this, as Gilad points out, is that in the world of back buttons and tabbed browser, there is no single session state: the same user in the same session might be simultaneously exploring two booking options, and the server can easily get confused between them. Encoding the information in hidden fields on the page means that the server’s idea of the current state always matches the user’s." 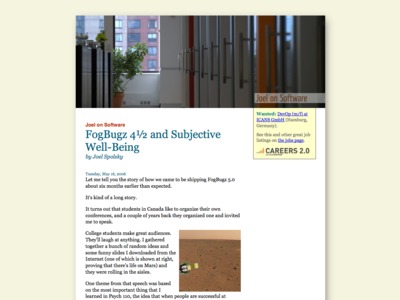 "If you're a software designer, this is it. This is your big chance to do something meaningful to improve the world. Design software that puts the user in control and you'll increase happiness, even if your product is the most boring accounting software imaginable.

"Topincs is a Topic Map authoring tool, that allows groups to create Topic Maps in Firefox. Even though it is run in an ordinary browser window it feels like an application installed on your computer. [...] It consists of a client, for editing maps and a server, for storing them. [...] The Server requires Apache 2, PHP 4 and MySQL."

Accessing the web of databases 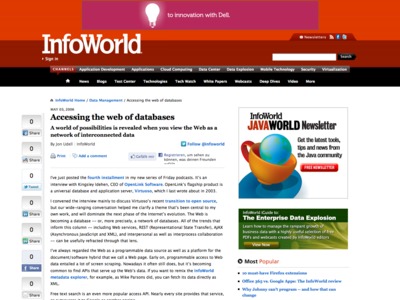 Jon Udell at InfoWorld - Accessing the web of databases:

"I’ve always regarded the Web as a programmable data source as well as a platform for the document/software hybrid that we call a Web page. Early on, programmable access to Web data entailed a lot of screen scraping. Nowadays it often still does, but it’s becoming common to find APIs that serve up the Web’s data.

[...] Free text search is an even more popular access API. Nearly every site provides that service, or outsources it to Google or another engine.

[...] What you can’t typically do, though, is create mashups by running ad hoc queries against remote Web data. There are good reasons to think that it’s just crazy to export open-ended query interfaces over the Web. No responsible enterprise DBA would permit such access to the crown jewels. But there are all kinds of data sources -- or what Idehen likes to call data spaces -- and a range of feasible and appropriate access modes."

"The Google Data APIs ("GData" for short) provide a simple standard protocol for reading and writing data on the web. GData combines common XML-based syndication formats (Atom and RSS) with a feed-publishing system based on the Atom publishing protocol, plus some extensions for handling queries."