"Like everybody else, we started with One Database All Hail The Central Database, and have subsequently been forced into clustering. However, we've eschewed any of the general purpose cluster technologies (mysql cluster, various replication schemes) in favor of explicit data partitioning. So, we still have a central db that keeps track of where to find what data (per-user, for instance), and N additional dbs that do the heavy lifting. Our feeling is that this is ultimately far more scalable than black-box clustering."

"If I were still working in IT, I’d declare that any software solution pitched to me could not get through my door as a stack of install discs, a quick start guide, and a “give me a call if you run into any trouble.”

Leave me with a DVD that has a VM image I can copy to my local drive and execute with the OS’s default virtualization engine.

[...] I would have taken a lot more demos from vendors, and taken looks at a lot more intermediate builds if I could have just double-clicked on a virtual disk image with 100 percent certainty that the OS and application would just run."

How to configure a low-cost load-balanced LAMP cluster

Keith Winston at Linux.com - How to configure a low-cost load-balanced LAMP cluster:

"The ubiquitous Linux, Apache, MySQL, and PHP/Perl/Python (LAMP) combination powers many interactive Web sites and projects. It's not at all unusual for demand to exceed the capacity of a single LAMP-powered server over time. You can take load off by moving your database to a second server, but when demand exceeds a two-server solution, it's time to think cluster."

Giving the user control over accesskeys

"The normal way for a website to define a shortcut key is to use the accesskey attribute on an element that may have such an attribute, specifying a character that becomes the shortcut key in combination with one or more other keys as implemented by the browser (typically Alt in Windows and Ctrl in Mac OS X).

That doesn’t leave the user with any way to change the accesskeys defined by a website. Well, now there are at least two ways that web developers can offer that possibility."

"FeedStation allows you to download enclosures that appear in your NewsGator Online or FeedDemon feeds. " That's nice. Sounds like I can automate downloads for any kind of file...

Thinking beyond podcasting: I've got a couple of applications on the web (like this weblog) for which I can do automated (local) backups (via a shell script run from a cron job), and currently I manually copy them over to my Windows laptop - from time to time, when I remember doing so.

How about setting up an ultra-simple PHP script producing an Atom (or RSS) feed with enclosures pointing to the files in that backup directory?

When I think about this, shouldn't automatically getting the latest copy of my favourite software be as simple as subscribing to its "download"-feed (with enclosures)? (And a naive question, since I haven't really thought about this - what's the difference between "photocasting" and automatic enclosure downloads from image feeds into my picture directory?) 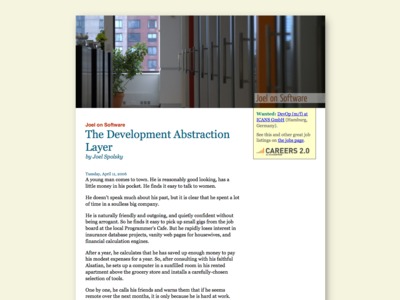 "A programmer is most productive with a quiet private office, a great computer, unlimited beverages, an ambient temperature between 68 and 72 degrees (F), no glare on the screen, a chair that's so comfortable you don't feel it, an administrator that brings them their mail and orders manuals and books, a system administrator who makes the Internet as available as oxygen, a tester to find the bugs they just can't see, a graphic designer to make their screens beautiful, a team of marketing people to make the masses want their products, a team of sales people to make sure the masses can get these products, some patient tech support saints who help customers get the product working and help the programmers understand what problems are generating the tech support calls, and about a dozen other support and administrative functions which, in a typical company, add up to about 80% of the payroll."

"It turns out that it really is fast and cheap to develop applications in PHP. Most scaling and performance challenges are almost always related to the data layer, and are common across all language platforms. Even as a self-proclaimed PHP evangelist, I was very startled to find out that all of the theories I was subscribing to were true."

"Many cool people are using this database wrapper library for PHP to ensure that their programs are database independent. Here is a list of software applications using ADODB."

"Polarion® for Subversion - Software Lifecycle Management for Teams and Enterprises: At last there's a unified, single-source repository-based, web centric approach to software lifecycle management with just the right level of support for a project team right up to a large enterprise."

"Inside the enterprise, teams, tasks, products, and services define metadata vocabularies that the Internet search giants would kill for. Exploiting those vocabularies to deliver search results that are better than what’s available on the open Web is low-hanging fruit. As we roll out SOAs that route well-formed messages through a fabric of intermediaries, it’ll get even easier."

"Onlife is an application for the Mac OS X that observes your every interaction with apps such as Safari, Mail and iChat and then creates a personal shoebox of all the web pages you visit, emails you read, documents you write and much more. Onlife then indexes the contents of your shoebox, makes it searchable and displays all the interactions between you and your favorite apps over time."

"We can approach everything through one of three moral systems:

"The problem is that, with current software practices, the developers do not know where they stand any more than the managers do. The developers know what they are doing, but they do not have personal plans, they do not measure their work, and they do not track their progress. Without these practices to guide them, software people do not know with any precision where they are in the job. They could tell the manager that they are pretty close to schedule or 90 percent done with coding, but the fact is that they do not really know. Again, as Brooks said, "...programmers generally think that they are 90 percent through with the coding for more than half of the project."

"Workers can maintain productivity more or less indefinitely at 40 hours per five-day workweek. When working longer hours, productivity begins to decline. Somewhere between four days and two months, the gains from additional hours of work are negated by the decline in hourly productivity. [...] A hundred years of industrial research has proven beyond question that exhausted workers create errors that blow schedules, destroy equipment, create cost overruns, erode product quality, and threaten the bottom line."