The Problem with Programming 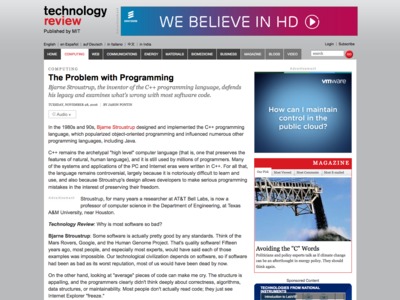 "In theory, the answer is simple: educate our software developers better, use more-appropriate design methods, and design for flexibility and for the long haul. Reward correct, solid, and safe systems. Punish sloppiness.

In reality, that's impossible. People reward developers who deliver software that is cheap, buggy, and first. That's because people want fancy new gadgets now. They don't want inconvenience, don't want to learn new ways of interacting with their computers, don't want delays in delivery, and don't want to pay extra for quality (unless it's obvious up front--and often not even then). And without real changes in user behavior, software suppliers are unlikely to change.

We can't just stop the world for a decade while we reprogram everything from our coffee machines to our financial systems. On the other hand, just muddling along is expensive, dangerous, and depressing."