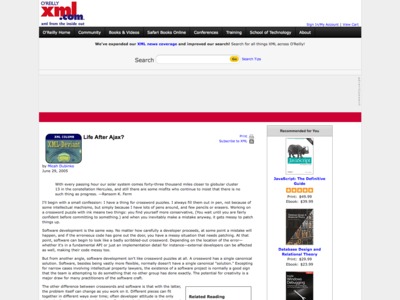 "Working on a crossword puzzle with ink means two things: you find yourself more conservative, (You wait until you are fairly confident before committing to something.) and when you inevitably make a mistake anyway, it gets messy to patch things up.

Software development is the same way. No matter how carefully a developer proceeds, at some point a mistake will happen, and if the erroneous code has gone out the door, you have a messy situation that needs patching. At that point, software can begin to look like a badly scribbled-out crossword."

"In every application I've ever worked on application performance was governed by the following factors, in rough order of their importance:

Notice how PHP being naturally slower than Java (something I believe to be true) comes in last? That's a distant last."

How do you design a remixable Web application?

Jon Udell - How do you design a remixable Web application?:

"A website that wants to be remixable will deliver content as XML and behavior as script. These aspects can be, and will be, combined server-side for Web 1.0 clients, but Web 2.0 clients will increasingly be able to do this processing for themselves. So there will be two ways to remix: by intercepting the server-side combination of XML content and scripted behavior, or by recombining on the client."

From the Backpack Manifesto:

Sony products are too much trouble - The Queen

According to Macworld UK, "iPod user HRH Queen Elizabeth II has admitted she finds Sony products too difficult to use. Sony's new CEO Howard Stringer recounted a luncheon with the Queen to Sony shareholders. He told them that the Queen had struggled with certain Sony products. According to Stringer the Queen told him: "I have a lot of trouble with your remote controls. Too many arrows."

Zachary Kessin at ONLamp.com: "This article shows how to set up a simple SOAP server in PHP and call it from JavaScript."

"Irrespective of the language programmers choose for expressing solutions, their wants and needs are similar. They need to be productive and efficient, with technologies that do not get in the way but rather help them produce high-quality software. In this article, we share our top ten list of programmers' common wants and needs."

Rails vs. PHP: MVC or view-centric?

"This week, I decided to try PHP and Ruby-on-Rails for prototyping web applications (I'd never used either before). [...] So why did I like PHP so much better than Rails?"

"Give first-time users a series of quick wins that become increasingly complex. When I first log in, I want to create a Web page. Next, I'd like to add some styles to it. Then, I'd like to make links to some other Web pages. I'll build a navigation system after that, and start to add other features eventually. But I want to feel successful with your system within a few minutes. I don't want to you to present the stunning power at my fingertips until I'm comfortable with my surroundings."

"IPTC metadata were employed by Adobe Systems Inc. to describe photos already in the early nineties. A subset of the IPTC "Information Interchange Model - IIM" was adopted as the well known "IPTC Headers" for Photoshop, JPEG and TIFF image files which currently describe millions of professional digital photos.

In 2001 Adobe launched a new metadata framework called "Extensible Metadata Platform - XMP" and made it available in Photoshop (version 7 and CS) and other CS products. Photoshop also implemented a simple synchronisation between the - now "legacy" - IPTC headers and metadata elements of the XMP framework which works back and forth.

In 2004 a joint effort of the IPTC, Adobe and IDEAlliance started to work on

* the "IPTC Core" Schema for XMP for a smooth and explicit transfer of metadata values from the IPTC Headers to the XMP framework * a specification on how to synchronise legacy IPTC header values with the new "IPTC Core" - back and forth."

"Every day, all over the world, programmers have to recycle legacy data, translate from one vendor's proprietary format into another's, check configuration files, and yank data out of web server logs. This kind of programming is usually called data crunching, and while it's not glamorous, knowing how to do it with the least amount of effort can make the difference between meeting a deadline and making another pot of coffee. These ten tips will take the headache out of crunching data."

A Decade of PHP

So it's PHP's 10th birthday today, and a lot of people wrote about their story with PHP; so here's mine. It's not that interesting as I'm a mere user of PHP (having contributed nothing but a few bug reports):

In 1998, a friend showed me the php.net homepage - we were impressed by PHP3's functionality and database connectivity, and by the unbelievably useful online manual.

A few weeks later, I went to a job interview - they said it was OK not to know PHP yet, they'd train me on the job. And they did! Thies C. Arntzen was my boss, and it was absolutely great being taught PHP - and programming in general - by him.

In some ways our company's use of PHP was different from the mainstream: Even back in 1998, with PHP3, we were building a commercial, relatively large (and expensive...) web-based application, we were using the PHP CLI for background (daemon) and batch processes, doing XML processing, object oriented programming, and running on Oracle. And we still do so now.

It's been seven good years during which PHP helped feed my family, and I'm still surprised all this is possible with "just a scripting language"... A big thank you to the PHP Group!

The Form Assembly: "The Form Builder is a tool for creating standard compliant web forms. It integrates the wForms extension and relies on a set of technologies like XML, XMLHttpRequest, XSLT and DOM (a.k.a Ajax) to provide a seamless single-screen experience."