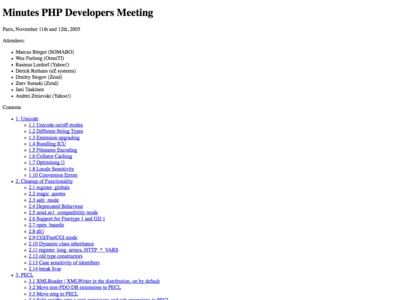 Derick Rethans’ minutes of the PHP Developers Meeting in Paris November 11th and 12th, 2005, planning for PHP 6 - some interesting excerpts:

1.1 Unicode on/off modes: “[…] We also discussed whether we should even allow Unicode mode to be turned off as current micro benchmarks show that the Unicode implementations of some of the string functions are up to 300% slower, and whole applications up to 25% slower. Disallowing Unicode mode to be turned off is expected to slow down the adoption of PHP 6 too as many ISPs would be reluctant to install a version that immediately slows down the applications of their users.”

2.1 register_globals: “[…] We are going to remove the functionality.”

3.5 Fileinfo extension in the distribution: “[…] The mime_magic extension doesn’t work very well, and there is an extension in PECL (Fileinfo). We suggest to include this extension into the core, and enable it by default as MIME-type detection is something that most web applications need.”

6.1 Add an opcode cache to the distribution (APC): “[…] 1. We include APC in the core distributions 2. APC will not be turned on by default.”

6.6 E_STRICT on by default: “[…] As we want to expose the language level warnings a bit more, and because of having all error levels in E_ALL, except E_STRICT is confusing we will be adding E_STRICT to E_ALL. As the current default is E_ALL & ~E_NOTICE we will effectively turn on E_STRICT by default.”