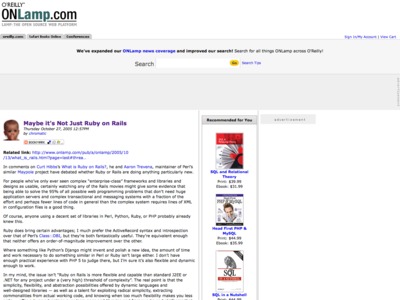 “In my mind, the issue isn’t “Ruby on Rails is more flexible and capable than standard J2EE or .NET for any project under a (very high) threshold of complexity". The real point is that the simplicity, flexibility, and abstraction possibilities offered by dynamic languages and well-designed libraries – as well as a talent for exploiting radical simplicity, extracting commonalities from actual working code, and knowing when too much flexibility makes you less agile – offer a huge advantage over languages and libraries and frameworks and platforms that assume you need a lot of hand-holding to solve a really hard problem.

Yes, Ruby on Rails does what it does very well. It’s not the only thing that does, though. I wonder perhaps if some of the buzz and glow is that it’s new and shiny (in comparison), so that people haven’t already formed their own opinions about it.”