Learning from THE WEB 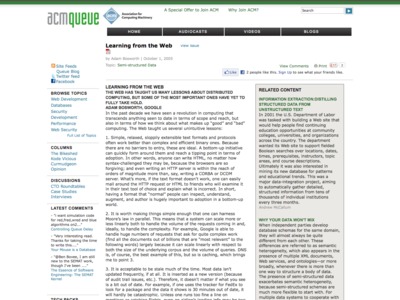 Adam Bosworth at ACM Queue - Learning from THE WEB:

“Successful systems on the Web are bottom-up. They don’t mandate much in a top-down way. Instead, they control themselves through tipping points. For example, Flickr doesn’t tell its users what tags to use for photos. Far from it. Any user can tag any photo with anything (well, I don’t think you can use spaces). But, and this is a key but, Flickr does provide feedback about the most popular tags, and people seeking attention for their photos, or photos that they like, quickly learn to use that lexicon if it makes sense. It turns out to be amazingly stable.

[…] It is time that the database vendors stepped up to the plate and started to support a native RSS 2.0/Atom protocol and wire format; a simple way to ask very general queries; a way to model data that encompasses trees and arbitrary graphs in ways that humans think about them; far more fluid schemas that don’t require complex joins to model variations on a theme about anything from products to people to places; and built-in linear scaling so that the database salespeople can tell their customers, in good conscience, for this class of queries you can scale arbitrarily with regard to throughput and extremely well even with regard to latency, as long as you limit yourself to the following types of queries. Then we will know that the database vendors have joined the 21st century.”