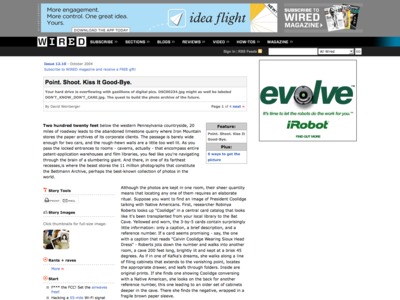 "As you pass the locked entrances to rooms - caverns, actually - that encompass entire patent-application warehouses and film libraries, you feel like you're navigating through the brain of a slumbering giant. And there, in one of its farthest recesses,is where the beast stores the 11 million photographs that constitute the Bettmann Archive, perhaps the best-known collection of photos in the world.

Although the photos are kept in one room, their sheer quantity means that locating any one of them requires an elaborate ritual. Suppose you want to find an image of President Coolidge talking with Native Americans. First, researcher Robinya Roberts looks up "Coolidge" in a central card catalog that looks like it's been transplanted from your local library to the Bat Cave. Yellowed and worn, the 3-by-5 cards contain surprisingly little information: only a caption, a brief description, and a reference number.

[…] This process of manual metadata tagging, subjective and labor-intensive, may work for Corbis, but it's a lot to ask of the rest of us. Even when software developers try to make it easy, it's not easy enough. For instance, Adobe Photoshop Album offers a similar type of drag-and-drop labeling. Right now, you have to enter keywords manually; presumably someday you'll be able to upload the names of people, places, and events from your address book and calendar so at least you can drag and drop familiar names. Still, mere mortals don't have a 60,000-term online taxonomy or twin screens. More to the point, we don't want to hire Nick Fraser to do the job."