HOWTO Avoid Being Called a Bozo When Producing XML 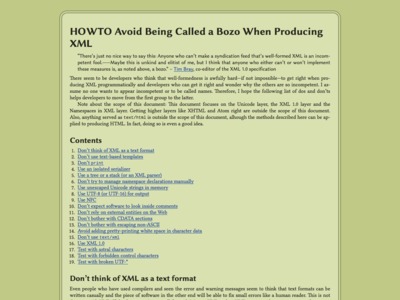 “There seem to be developers who think that well-formedness is awfully hard - if not impossible - to get right when producing XML programmatically and developers who can get it right and wonder why the others are so incompetent. I assume no one wants to appear incompetent or to be called names. Therefore, I hope the following list of dos and don’ts helps developers to move from the first group to the latter.”