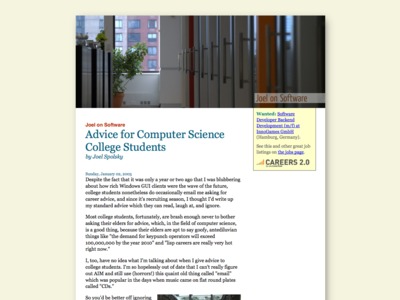 "When you look at any programming organization, the programmers with the most power and influence are the ones who can write and speak in English clearly, convincingly, and comfortably. Also it helps to be tall, but you can't do anything about that.

The difference between a tolerable programmer and a great programmer is not how many programming languages they know, and it's not whether they prefer Python or Java. It's whether they can communicate their ideas. By persuading other people, they get leverage. By writing clear comments and technical specs, they let other programmers understand their code, which means other programmers can use and work with their code instead of rewriting it. Absent this, their code is worthless. By writing clear technical documentation for end users, they allow people to figure out what their code is supposed to do, which is the only way those users can see the value in their code."