"I work for a company with a large IT infrastructure. We have lots of applications in our environment. For a number of applications, vendors provide the apps, and provide core support to those app servers. Our vendors are notorious for demanding superuser access to the boxes that support their applications. To protect our enterprise network from attacks allowed in by well-meaning but less-than-perfectly-competent vendors, we have set up a quarantined network for each vendor.

Our biggest challenge is keeping track of all of the dependencies and managing what ports need to be allowed to which destinations. Of course, when security is tight our business-types say 'you're breaking my application.'"

InfoWorld: The top 20 IT mistakes to avoid

Chad Dickerson - The top 20 IT mistakes to avoid:

IT managers who look only as far as J2EE and .Net when developing scalable Web apps are making a mistake by not taking a second look at scripting languages -- particularly PHP. This scripting language has been around for a decade now, and millions of Yahoo pages are served by PHP each day. [...]

Doug Pierce, technical architect at Datavantage, says that violating the KISS (keep it simple, stupid) principle is a systemic problem for IT. Pierce says he has seen â€œhundreds of millionsâ€ of dollars wasted on implementing, failing to implement, or supporting solutions that are too complex for the problem at hand. According to Pierce, although complex technologies such as CORBA and EJB are right for some organizations, many of the organizations using such technologies are introducing unnecessary complexity.

This violation of the KISS principle directly contributes to many instances of project failures, high IT costs, unmaintainable systems, and bloated, low-quality, or insecure software."

"[...] that RelaxNG is the world's best schema language, and that anyone who who's using XML but not RelaxNG should be nervous." 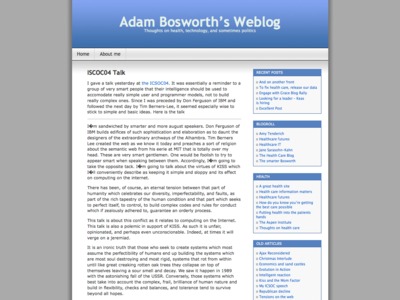 [...] What is more, in one of the unintended ironies of software history, HTML was intended to be used as a way to provide a truly malleable plastic layout language which never would be bound by 2 dimensional limitations, ironic because hordes of CSS fanatics have been trying to bind it with straight jackets ever since, bad mouthing tables and generations of tools have been layering pixel precise 2 dimensional layout on top of it. And yet, ask any gifted web author, like Jon Udell, and they will tell you that they often use it in the lazy sloppy intuitive human way that it was designed to work. They just pour in content. In 1996 I was at some of the initial XML meetings. The participants' anger at HTML for "corrupting" content with layout was intense. Some of the initial backers of XML were frustrated SGML folks who wanted a better cleaner world in which data was pristinely separated from presentation. In short, they disliked one of the great success stories of software history, one that succeeded because of its limitations, not despite them. I very much doubt that an HTML that had initially shipped as a clean layered set of content (XML, Layout rules - XSLT, and Formatting- CSS) would have had anything like the explosive uptake.

Now as it turns out I backed XML back in 1996, but as it turns out, I backed it for exactly the opposite reason. I wanted a flexible relaxed sloppy human way to share data between programs and compared to the RPC's and DCOM's and IIOP's of that day, XML was an incredibly flexible plastic easy going medium. It still is. And because it is, not despite it, it has rapidly become the most widely used way to exchange data between programs in the world. And slowly, but surely, we have seen the other older systems, collapse, crumple, and descend towards irrelevance.

Consider programming itself. There is an unacknowledged war that goes on every day in the world of programming. It is a war between the humans and the computer scientists. It is a war between those who want simple, sloppy, flexible, human ways to write code and those who want clean, crisp, clear, correct ways to write code. It is the war between PHP and C /Java. It used to be the war between C and dBase. Programmers at the level of those who attend Columbia University, programmers at the level of those who have made it through the gauntlet that is Google recruiting, programmers at the level of this audience are all people who love precise tools, abstraction, serried ranks of orderly propositions, and deduction. But most people writing code are more like my son. Code is just a hammer they use to do the job. PHP is an ideal language for them. It is easy. It is productive. It is flexible. Associative arrays are the backbone of this language and, like XML, is therefore flexible and self describing. They can easily write code which dynamically adapts to the information passed in and easily produces XML or HTML.

[...] I remember listening many years ago to someone saying contemptuously that HTML would never succeed because it was so primitive. It succeeded, of course, precisely because it was so primitive. Today, I listen to the same people at the same companies say that XML over HTTP can never succeed because it is so primitive. Only with SOAP and SCHEMA and so on can it succeed. But the real magic in XML is that it is self-describing. The RDF guys never got this because they were looking for something that has never been delivered, namely universal truth."

"The Java API's grow into a morass of inconsistent and incomprehensible API's, even the most simple things proved to be very complicated.

[...] So let's look at the requirements for today's corporate applications:

Given these requirements, Java does not fare very well:

So if Java does not meet these requirements, what does? Apparently what is needed is a language/environment that is loosely typed in order to encapsulate XML well and that can efficiently process text. It should be very well suited for specifying control flow. And it should be a thin veneer over the operating system.

Most Linux distribution in fact bundle three such languages, PHP, Python, and Perl."

"The image displayed across the top of the site (for those using CSS compliant browsers) is a 1600 pixel-wide panoramic view from the top of my parents' house, in Dorset. The scene was originally captured as a series of photographs, before being manually traced in Xara X and Photoshop 7 to produce the cartoony version you (hopefully) see here.

There are ninety versions of this panorama, each depicting the same scene under a different weather condition, time of day, and (at night) phase of the moon.

Thanks to an XML feed from weather.com, and some PHP jiggery pokery, the end result is a fairly accurate representation of what my parents see when they look out of their upstairs windows."

"Stylegala aims to promote, discuss and inspire the web audience in the areas of design, CSS and web standards - combined."

"PHP/SWF Charts makes the best of both the PHP and SWF worlds. PHP scripts provide integration, and Flash provides the best display quality.

Paul Graham - Made in USA:

"Systematic" is the last word I'd use to describe the way good programmers write software. Code is not something they assemble painstakingly after careful planning, like the pyramids. It's something they plunge into, working fast and constantly changing their minds, like a charcoal sketch.

In software, paradoxical as it sounds, good craftsmanship means working fast. If you work slowly and meticulously, you merely end up with a very fine implementation of your initial, mistaken idea. Working slowly and meticulously is premature optimization. Better to get a prototype done fast, and see what new ideas it gives you."

"Run your very own library from your home or office using our impossibly simple interface. Delicious Library's digital shelves act as a visual card-catalog of your books, movies, music and video games. A scan of a barcode is all Delicious Library needs to add an item to your digital shelves, downloading tons of info from the internet like the author, release date, current value, description, and even a high-resolution picture of the cover. Import your entire library using our exclusive full-speed iSight video barcode scanner."

Plugging my own OracleEditor.php project:

I started it in early 2003, and it's being downloaded more than 400 times a month (half of these hits coming from search engine bots, I suspect?). The freshmeat project counts 5,030 URL hits and 26 subscriptions. 40 people have e-mailed me so far regarding this script.

Not impressive, but I'm quite happy that there's actual users out there (besides the people in our own company, and our customers, using it).

In case you want to be notified when a new version is released, click "Subscribe to new releases" on freshmeat.

"The dbacl project consists of a set of lightweight UNIX/POSIX utilities which can be used, either directly or in shell scripts, to classify text documents automatically, according to Bayesian statistical principles."

"Having gotten used to Python over the last few months, I found myself cursing Java every time I had to do a format conversion. Why do I have to instantiate a number of objects just to convert from a String to an int? First, I have to convert to an Integer, and then I have to convert to an int -- you can't just cast from an Integer to an int, even though logically the are the same thing. Lame. As I was hacking these little annoyances kept bugging me about Java.

[...] Recently, I spent a lot of time looking at Javadocs to find the right conversions between types, and I found that a large portion of the base Java API is made up of functions to convert types -- the API is literally cluttered with all these functions. Ick!"

Simplicity is 'next big thing' in IT

"The Economist Magazine this week has published an IT survey, which declares the single message of simplicity Apple to have preached since its inception as "the next big thing".

"The next thing in technology is not just big but truly huge: the conquest of complexity", the Economist explains. It talks about how "most of us" find technology frustrating, infuriating and sometimes tortuous at times. The title is trying to assess the work done by the IT industry to simplify matters.

The survey looks at two recent consumer-technology successes: Apple's iPod and Google. Writer, Andreas Kluth, said: "Google and the iPod are successful because each rescues consumers from a particular black hole of complexity"."

"Now in Tiger, Cocoa can manage your data objects themselves through the power of Core Data, providing automatic undo/redo support, additional user interface synchronization, and data consistency, correctness, and speed enhancements when it's time to write to disk.

Core Data gives you the ability to create a description of your data objects. Once defined, Core Data handles most of the heavy work of managing your data objects, both in-memory and on-disk. This allows you to focus on application logic and avoid the infrastructure work. In short, Core Data is a model-driven object management graph and persistence framework.

In Tiger, Core Data will support three different kinds of files for storage of data:

"Sharedance is a high-performance server that centralize ephemeral key/data pairs on remote hosts, without the overhead and the complexity of an SQL database.

It was mainly designed to share caches and sessions between a pool of web servers. Access to a Sharedance server is trivial through a simple PHP API and it is compatible with the expectations of PHP 4 and PHP 5 session handlers."